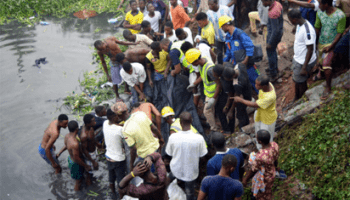 At least 11 people are said to have lost their lives in a river when a boat carrying 29 passengers capsized on Tafa River, Maun 2 in Ipokia local government area of Ogun State. The boat emptied the passengers into the water.

The boat was ferrying passengers and goods from Badagry in Lagos to Maun in Ipokia when the engine suddenly malfunctioned mid-way on the river, with the passengers crying for help before it went down.

A source said the passengers, majority of them traders, were taking their goods to a market in Badagry area of Lagos, before the boat tumbled into the water, leaving 11 people dead, while 10 others were rescued alive by local divers.

According to the source, search is still on – going for others believed to be missing. The incident happened on Friday night.

The Ogun Police Command, Abimbola Oyeyemi, who confirmed the boat mishap, attributed the cause to overload.

“Yes. There was a boat capsize. It was overloaded. The boat did not have light and travelled in the night. It had a head-on collision with a pillar in the river.

“The passengers were coming from Badagry in Lagos to Ipokia. It was the last boat left and all the 29 traders boarded the boat. 16 rescued live, 10 died yesterday and one died Friday. No live jackets.

“There were marines at the site. Two missing, Skipper arrested after he ran away.”

Oyeyemi said the Commissioner of Police, Ahmed Iliyasu, has given directive that henceforth, the DPO should enforce that boat must have live jackets and not carry more than its capacity.

It was learnt that the remains of the deceased have been deposited at a morgue in Ipokia.