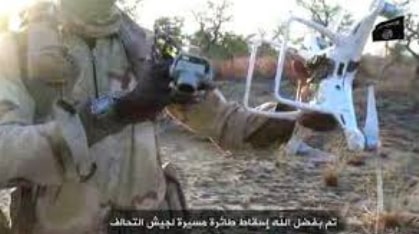 By Jide Babalola, The Nation

Faced with increasing loss of personnel and strongholds, ISIS and operatives from its affiliates, including Boko Haram, are nearing advanced stages in turning ‘civilian’ drones into deadly weapons of warfare, expert intelligence and counter-terrorism evaluations from the United States have warned.

A global alert from the US-based Combating Terrorism Centre based in the United States Military Academy (USMA) in West Point, New York, notes that the Islamic State has effectively reached a threatening stage in the use of modified commercial drones as weapons.

The report titled, “The Islamic State and Drones: Supply, Scale and Future Threats” and made available to The Nation by a source in Abuja indicates that after recording some measure of success in deploying multitudes of drones for attacks in Syria and Iraq, ISIS and its affiliates are fine-tuning the use of drones in other places.

Citing the Saturday, August 4, 2018 attack against Venezuelan President, Nicolas Maduro, with two drones packed with explosives, the source stated that tactically, drone assassins can be cheap, deadly, easily within the reach of anyone, including dangerous elements and capable of causing incredible destruction without the direct use of personnel.

“The military is already aware and working in concert with other nations in taking appropriate and decisive actions for the maintenance of Nigeria’s territorial integrity and protection of the lives of her citizens.

“The matter you are talking about falls within the focus of the Defence Intelligence Agency (DIA) which has continued to sustain its vital but discreet operations,” said Agim while tactically avoiding to elaborate countermeasures being worked out by DIA and United States intelligence agencies.

Although he refused to disclose classified details of the NAF’ s operational plans and strategies, NAF’s spokesman, Air Commodore Ibikunle Daramola, stated that while advances are being made in the operational use of drones against Boko Haram terrorists, other long-term plan for the deployment of technology to neutralise major security threats are being put in place under the Chief of Air Staff, Air Marshal Sadique Abubakar.

The Nation gathered that part of such long-term technological warfare plans includes the Air Force Institute of Technology, Kaduna where a limited number of specially-screened intakes are now undertaking specialised studies and research in aeronautics, aerospace engineering and avionics at diploma and postgraduate levels.

The report from the US Combating Terrorism Center, which analysed the evolving threat in ISIS and its affiliates’ deep interest in drones, notes that the terrorists have also been studying how to jam signals from American military drones.

The Islamic State is a group known for doing things a bit differently, for its capacity for innovation, and for its many ‘firsts’; two of those ‘firsts’ happened within months of each other.

“The first occurred in October 2016 when the group used a bomb-laden drone to kill, after the explosive hidden within the drone killed two Kurdish Peshmerga soldiers who were investigating the device; another ‘first’ happened in January 2017 when the Islamic State released a propaganda video that showed nearly a dozen examples of the group releasing munitions on its enemies from the air with a fair degree of accuracy via quadcopter drones it had modified,” it stated.

Among others, the report went on to paint a picture of the threat that terrorists’ mass deployment of weaponized drones could pose.

“Future attacks using not just one, but multiple aerial drones should be expected, too; the Islamic State has displayed such a capability.

“During a speech in May 2017, the current head of US Special Operations Command, General Raymond Thomas, noted how during the battle for Mosul “in the span of 24 hours, there were 70 drones in the air.”

He went on to add how “at one point there were 12 enemy drones-‘killer bees’ dropping 40 mm bombs.

“The commander of the US Army’s Combined Arms Center, Lieutenant General Michael D. Lundy, has also noted how the Islamic State’s use of commercial drones in Iraq has “gone to almost swarm-level capability in a couple of cases; so, the group’s use of multiple drones is no longer hypothetical, but a demonstrated capability.

“It is likely that the group of drones used by the Islamic State in these cases were remotely controlled by a collection of group members operating at a stand-off distance,” it stated.

Across Nigeria, drone enthusiasts, including hobbyists and film makers regularly explore innovative ways of using drone technology but on May 8, this year, the federal government announced an immediate ban on launching Remotely Piloted Aircraft (RUA) or Unmanned Aerial Vehicles (UAV) in its airspace without a permit from the Nigerian Civil Aviation Authority (NCAA) as well as the Office of the National Security Adviser (ONSA).

While many Nigerian drone hobbyists appear not to have taken government’s concerns with much seriousness, reports like “The Islamic State and Drones: Supply, Scale and Future Threats” emphasise the need for governments and individuals across the world to feel more concerned about the violent breach of security and potential destruction that weaponised commercially-available drones may cause.