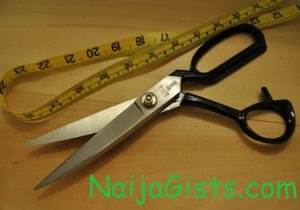 Oct 14, 2017 – Tragedy As Tailor Stabs Customer To Death In Zaria Over Sallah Clothes

A simple disagreement between a tailor, Inyasi Musa Aliyu Mai Yasin of Sabon Layi Tudun Wada, Zaria over non-fulfillment of sewing of cloth with his customer, Bashir Shehu Ibrahim (20 years) has resulted to the death of the customer.

A relative to the deceased, Rabi’u Ibrahim said, the issue was all about the sewing of cloth which late Bashir gave to Inyasi who is a tailor for the Eid-el-fitr (karamar Sallah) which the tailor did not sow, despite paying him the money he charge.

DAILY POST reports that when late Bashir went to the tailor’s shop on that fateful day, with the intention of collecting his cloths, a disagreement ensued between them as the cloth was not ready.

According to Rabiu, they were neighbours for many years but Inyasi ignored the long relationship and went ahead to injure the victim with a scissors. He said, “We rushed him to hospital but within 10 minutes of the happening, he died.

“As we were returning from the hospital with the corpse of late Bashir, the father of Inyasi called the police and handed Inyasi to them, telling them that he is the one that killed Bashir,” he explained.

The Divisional Police Officer, Tudun Wada, Zaria, confirmed the incident to be true of what happened, stressing that they have forwarded the matter to the State Command for further investigations and actions.

Confirming the killing, the Police Public Relations Officer, Kaduna State Command, ASP Mukhtar Hussaini Aliyu, also confirmed the incident and said that the suspect is in their custody.

ASP Aliyu further explained that the information before them is that late Bashir went to the tailor’s shop for his cloth and there they started fighting and as a result, the tailor Inyasi used his scissors to stab him, leading to Bashir’s death.