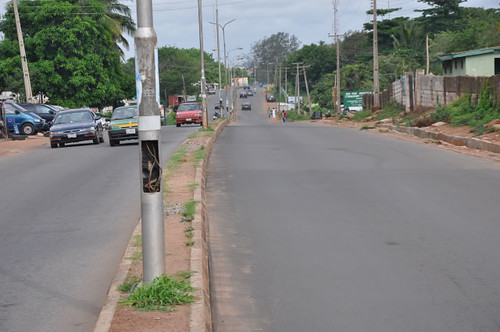 There was pandemonium at Kemta – Idi Aba area of Abeokuta, Ogun State, for the better part of Monday morning as a passenger died inside a taxi on his way to buy herbal medicine.

The passenger identified as Michael Hogan boarded the taxi and was going to Abeokuta from Odeda in Odeda local government area of the state, but died getting to his destination.

We gathered that the driver of the taxi got to know of the incident when the passenger could not alight from the car on getting to Iyana mortuary junction in Idi – Aba area of the state capital and raised an alarm that attracted fellow drivers and passersby to the scene.

Our correspondent learnt that the deceased was hurrying to the home of an herbal remedies vendor in the state capital when the unfortunate incident happened.

Passers-by fled the scene just as the driver too abandoned his cab and took to his heel.
But the taxi driver was encouraged by eyewitnesses to carry the remains of the passenger to the nearest station – Kemta – Idi Aba Divisional Police Headquarters, Kemta.

At the police station, another round confusion ensued as the police not only arrested the taxi driver, but also battled frantically to contain curious crowd that besieged the station to catch a glimpse of the driver and the dead passenger.

The state’s Police Public Relations Officer, Olumuyiwa Adejobi, who confirmed this to The Nation, said the driver discovered at exactly 7:45am that his passenger, now identified as Michael Hogan, had died in his car at Iyana Mortuary area and went to the police station to report the incident.

Adejobi, a Deputy Superintendent of Police, said the family of the deceased has been contacted, adding that upon inquiry, they claimed Hogan had been ill for a long time.