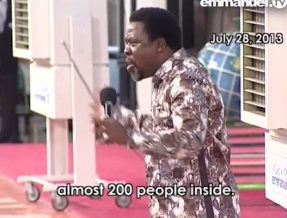 For every major disaster that happened, controversial Prophet TB Joshua, the founder of Synagogue Church of all nation (SCOAN) must surely have something to say.

If you check closely on his YouTube page, you won’t see anything there until after the event.

So again TB Joshua has released a new video claiming he prophesied the crash in July 2013. He said he predicted the crash of Boeing 777 last year.

In the video, he didn’t mention any country in particular however he said the plane he saw carried 200 passengers and that it developed fault during take off.

TB Joshua said the cause of the crash is impatience.

He took to his Facebook page to say the plane has crashed into the sea.

Was TB Joshua really talking about this same plane? Was his prediction dead right or fake?