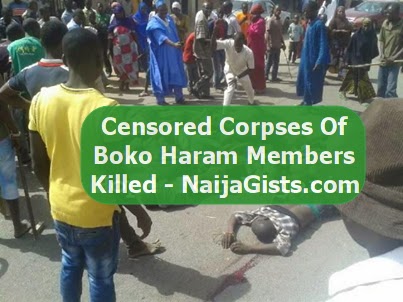 Some Boko Haram terrorists who drove in a convoy to attack an army barrack in Maiduguri today penetrated the barrack via a river at the back of the base.

The attack on Giwa Barack in Maiduguri today was severe and the sect succeeded in bombing the barrack and freeing their detained members.

Several large explosions were heard throughout the city during the duration of the raid.

University of Maiduguri students who saw the sect said they launched the attack on the barrack from the back of the University.

Two military jets were scrambled to ward off to ward off the attacks. One military source counted 22 corpses lying around in from of the barrack. The dead were members of the sect rounded up and killed by soldiers at an army base as they prepared to flee after the attack.

A military source said the sect succeeded in bombing the armory in the barracks causing huge explosions that were heard around the city.

The attack claimed the lives of many soldiers but military sources wouldn’t reveal the causality figures.

Civilian JTF captured some of the escaped prisoners and handed them over to the army.