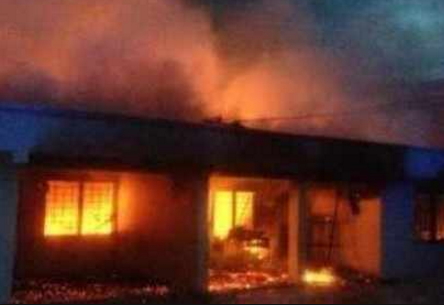 December 11, 2015 – Tears As Fire Burns Baby To Death At Ikota Housing Estate In Lekki Lagos After Mother Locks Him Inside Room

Tears flowed freely yesterday at the Ikota Housing Estate in Lekki Lagos after a 7-month-old baby died in a fire incident.

According to police report, the new mother identified as Mrs Monday just moved into the area.

Yesterday around 10am, she locked up her baby in the room while cooking in the kitchen. She later left the house for an undisclosed destination but before her return, the baby has been burnt to death.

An eyewitness said, “The family, Mr. and Mrs. Monday, just moved into the house.

“The woman was cooking something in the kitchen and she locked up her baby in the room. She later left the house. A few minutes later, fire broke out in the house and people called the fire service. But by the time they came, the structure had been razed, while the baby was dead.”

She has been arrested by the police.

Empress Njamah’s Brother John Distances Self From Nollywood “I Prefer To Be Called A Nigerian Actor”
Tonto Dikeh Promises To Prevent Marriage Crash, Says Friends Not Welcome To Her Home