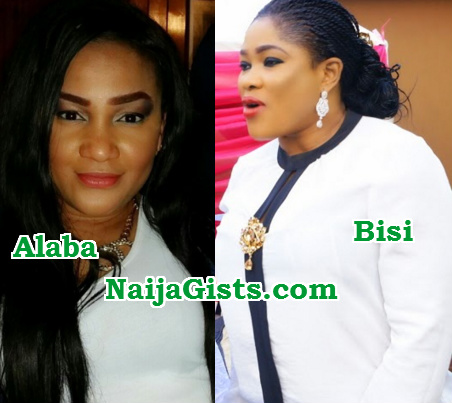 Absentee Nollywood actress Bisi Ibidapo dirty past has been exposed by a budding actress.

In an exclusive chat with a reporter, Alaba Olatunde narrated how a sad scenario played out between her and the ‘Omo logba logba’ of Nollywood, Bisi Ibidapo Obe a while back.

“I almost dated one actor/movie director, but I got my fingers burnt because his girlfriend then, Bisi Ibidapo-Obe caught us and dealt with me seriously; I still have the marks on me.

“It was the friend of a popular actor/movie director who asked me out and we got very close. But before we could get any further, Bisi, who was one of his girlfriends, came to meet me at a movie location in Abeokuta. On that day, I just had my bath and was just coming out of the bathroom; in fact, I was just tying my towel.

She was so furious and started shouting that I should leave her boyfriend alone! But before I could say anything, she had brought out a syringe from her back and stabbed me several times in the buttock. I was quickly rushed to a nearby hospital. But I thank God I survived it.”

“The case was resolved by the elders in the industry. She was asked to apologize and she did.

But we are no more friends. Her so-called boyfriend never reckoned with her afterwards. She thought I was the one preventing her from having a swell time with the guy, but she didn’t know it was another actress.”