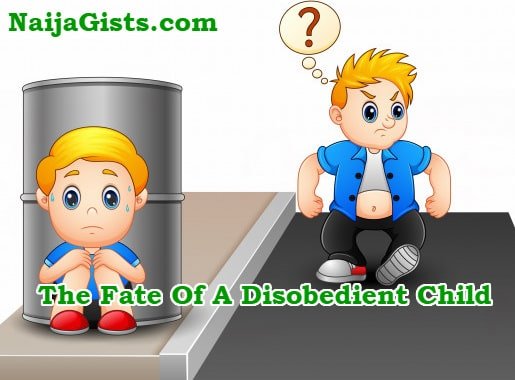 The Fate Of A Disobedient Child: A Short Story

It’s such a wonderful morning as Clinton James wakes up with a lot of optimism in him.
Though he couldn’t sleep that night, worrying and thinking of how wealthy his dad is but he’s not getting much as expected from him.

His dad, Sir Charles James is the former minister of health and had succeeded in establishing great things during his paying times. He has 11 filling stations, 15 hotels, 170 buses going for business for him, 50 shops and little other businesses.

‘Yes! My dad is stinkingly rich’, he taught, ‘my friends said that on a daily basis, but he gives me little or nothing every time I asked for money, but he always spend on Solomon my junior brother’
This made Clinton more sad everyday, and last night he finally arrived on a conclusion.

‘I will poison my dad and take all to myself’ he thought.
So rising up from the bed, he met his dad who just finished writing his Will for his only two children. He gave 60% of his wealth to his stubborn and wicked son, Clinton and 40% to his obedient and trusted son, Solomon.

Without knowing what just happened, Clinton bumped into the parlow shouting ‘dad! Daaad!! Daaaadd!!!, am here, give me fifty million to buy a shirt for myself oo’, he requested.
‘Clinton’!, his dad cautions him, ‘why have you decided to be a wasteful, disobedient son, you took after your mum who did a lot of harm training you the luxurious wrong way, where is she now, dead, yet you cannot change, your brother is busy working but you are just good for nothing’.

‘Heyyy, dad, stop those nonsense because I will deal with you personally’ Clinton replied angrily and left, leaving his ageing dad thinking:
‘Oh, if this boy knew what I willed to him, but why this stubbornness’ he murmurs.

At evening same day, he had gone with his same-feather’s friend to collect the poison and now he’s back with his mischievous plans.
He planned on poisoning his tea cup, so he proceeded on his plans, entered the kitchen, rubbed the poison inside the already washed tea cup. Then went inside his room to expect good news.
His dad always takes a cup of tea at 7pm always, so that day was not different, his aid brought the tea for him with that cup.

After drinking it with a free mind, he started vomiting, and then Clinton walked into the room, and started laughing
‘Yyyess!, dad, greet my mum over there’, Clinton said.
With pains, he replied, ‘you evil child, so you poisoned me,it will never be well with you’

As he was lamenting, Solomon came back from work, rushed and held him.
‘ Clinton, what have you done to dad?’ He asked.
‘ you are very stupid’ Clinton replied as he walked away.
His dying dad said to Solomon his son, ‘ rush into my room, under bed, get me the Will I wrote earlier and a pen, then a paper.’
‘Yes dad’ he replied.

As he hurried to bring it, the dad wrote something on the Will which Solomon did not understand, then wrote another thing on that other paper.
Then said to Solomon, please run to Barrister Emmanuel Okotie living nearby.

He rose up to go, his senior brother Clinton came in and fought to see what Solomon is holding. But Solomon started running out of the gate to the barrister. He started to pursue him but luckily, barrister Emmanuel is almost driving out of his house and from the mirrow, saw Solomon his neighbor’s son running towards him.

He stopped and Solomon threw the whole papers into the car, now Clinton could not stop him.

The barrister asked them what is going on and Solomon told him their dad was poisoned by his elder brother.
His brother denied it immediately, the barrister just opened the paper and saw it written: CLINTON POISONED ME., he rushed to their house and Sir Charles James was already dead.
Solomon cried bitterly with barrister Emmanuel consoling him but Clinton just quite not knowing his own fate.

Barrister Emmanuel helped them in burying their dad.
Then one year after the burial, the barrister came to read their father’s Will to them.

He gathered them to the parlour and thus read the Will:

‘WHAT IS IT!!!’ They both replied with eagerness to know.
I read:
I HEREBY CANCEL EVERYTHING I WILLED TO CLINTON BECAUSE OF HIS STUBBORNNESS AND HAVE WILLED EVERYTHING TO MY SECOND SON, SOLOMON, MY OBEDIENT SON. AND CLINTON MY WICKED SON MUST BE PUNISHED FOR KILLING ME.

Immediately, Clinton collapsed in tears and deep sorrow, Solomon also sad but cannot do anything to change it especially after enough begging the barrister can do nothing either.

Clinton was later arrested for murder and sentenced to life imprisonment.