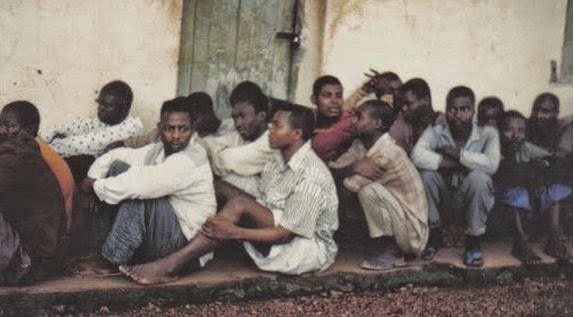 The Northern Youths Intellectual -Advocacy Forum is extremely disappointed that Indian Parliament has not had a chance to discuss why Nigerian asylum seekers are not given the required attention? Most of these victims of Boko Haram who fled Nigeria for the fear of being persecuted as well find succour in India in line with the UNHCR standard are now lamenting for a total neglect.

The plight of Nigerian in the refugee camps is one that suggest, the Indian government is playing a lipstick service to whatever diplomatic relationship it previously had with Nigeria.

In the words of Gbenga one of the asylum seekers ” the way Indian government is treating Nigeria asylum seeker is very bad.. right now there’s a problem in our country at least a Nigerian that go to india to seek asylum should be treated well, once you identified yourself it becomes a problem,at least they should look into the person case but since UNHCR has been establish in India they haven’t give a Nigerian refugee title.

It is unfair because our country contribute to United Nation money so with that the UNHCR should consider”. Though heavily placed at critical disadvantage but not in dire need to be deported once their request look into.

Ceteris paribus, I hope to use my position as President, Northern Youths Intellectual -Advocacy Forum to bring this up with the India High Commissioner to Nigeria for a speedy response to the plight of our brothers and sisters living in refugee camp in India, as well as the more general concerns about the use of detention for immigration purposes, sort of strategy that give police access to the biometric data of all asylum applicants, good as this may appear, we still hope it does not lead to criminalisation of people fleeing persecution.

Following the UNHCR Report, the UN’s refugee agency, says 2014 was the worst for refugee crises on record, reaching levels not seen since the Rwandan genocide 20 years ago. The population of forcibly displaced people is now 51 million, Yet no one fights for them. The report says.

While fleeing Nigeria in the first place?a major concern for the well-meaning Nigerians, doing so amount to selling Nigerian government too cheap in the eyes of the world that she can not carter for her own displaced citizenry. On the other side it is pertinent to note that the IDPs in Nigeria are overwhelmed with little or no resources to provide for their up- keep but it is better here in Nigeria no matter what than becoming a slave in another man’s land. However, this is a wake-up call for the leadership of President Muhammadu Buhari to first tackle the insurgency which is ravaging over 16,000 people.

Though UNICEF Report of April says 15,000 people have been killed by Boko Haram since 2009, when the group ramped up its violence. In 2014 alone, 7,300 people were killed by the group and more than 1,000 have died so far this year. Nigeria, with its population of 174 million people, has seen an estimated 1.5 million people flee their homes to escape Boko Haram-related violence. Many have fled within Nigeria while others have gone to Chad, Niger and Cameroon to seek refuge, where border crossings have nearly doubled in less than a year, according to the report.

Up until now we can boldly say that we are peace loving people, rendering assistance both human and financial resources to United Nation Missions across the globe, but the upsurge of insurgency has exposed our collective bargain to the extend of seeking asylum far-away India. No matter what? Nigerians wherever they may reside around the world deserves to be accorded some courtesy of respect because here in Nigeria we treat foreigners like egg even when they do not look it.

With discipline and sincerity in the way Nigerians conduct themselves, days of mal treating them abroad like a lesser human being is coming to a close, as Nigerian government is more committed than never under this leadership of Change. The NYIF has absolute confidence in the leadership of PMB, but new with everything in a government which had been bastardized by the previous government, requires a little bit of time to address humongous challenges confronting Nigeria as a nation.

It should be recalled that when Xenophobic Attack was on-going in South/Africa, we drew his attention through Open Letter dated 20th April 2015 which he responded by delegating the Formal Vice- President Atiku Abubakar in company of Akinwumi Adesina to resolves along other diplomatic rough.

We shall all get over the mystery surrounding Boko Haram in no time soon, mystery in the sense that it is fighting for Allah, and I ask which Allah? It is high time people knew Bokoharam is a democratic nemesis that affect the world at large, it is lunatic organization, it is no -respectal of religion, sex, region, young, old, government establishments and so on, yet the only language its understood is DESTRUCTION!

DESTRUCTION!! DESTRUCTION!!! It is clearly stated in the Holy Quran that” there is no compulsion in religion” Quran Chapter 2:286″ thus the activities of this lunatic organization negate the teaching of Islam, those dragging the name of Islam into this mess fail to understand some bases, first the leader of these group were never heard anywhere teaching Quran, neither do they organize Islamic lectures, seminar, conference, written any book related to Islam yet all of a sudden some groups would emerge from the blue, claiming they are fighting for Allah and people would easily believe them for convenience sake, you can not be more Catholic than Pope?

These lunatic organizations branded as Islamist militants have their own Quran with wonderful interpretation, the also have their Mecca different from that in Saudi Arabia, they do not pray five times a day, they would never fast in the month of Ramadan, in fact the kill and bomb more in this period, as forgiveness is not in their dairy except killing! Killing!! Killing!!! They would never give out zakat to the poor but have all the money to buy guns and bombs to sustain their existence.

Boko Haram and its allies are the greatest enemy of Islam by dragging its name into it. However the greatest beneficiary are the American, Europe and the likes. While the terrorist groups inflicted pains and devastation on people and communities, the manufacturers of bombs and guns smiles to the banks, yet quick to refer the activities of these lunatic organizations as Islamist groups, and until they stop selling bombs and guns the world may continue to suffer devastation. Whereas the worst of mankind is he or she who believe Boko Haram or any terrorist organization is fighting the course of Islam, it is ungodly, unthinkable, barbaric and at best enemy to our collective existence.

Whilst, I challenge, Shakau to lead by example, that is to take his own life first and be rewarded by 70 virgins in the hereafter as stated in his own version of Quran, but of course he is a coward and he would dare do it rather looking for those to deceive including the intelligent member of the public, who now see their fight as a Jihad for Islam.

Sadly the spill-over effect of this is the plight of Nigerians in refugee camps across the world, and until urgent and proactive measure is put in place, the hope of those far away from home would be a mirage.