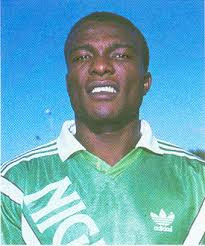 Thompson Oliha was pronounced dead by doctors around 4:05 am this morning at a private medical facility in Ilorin, Kwara state Nigeria.

According to his wife, Irish Oliha, her husband slumped this morning while easing himself in the toilet.

He was rushed to hospital where he was pronounced dead on arrival.

“I feel so sad to confirm to you that Thompson Oliha is dead and by the time his wife brought him here, he body was completely lifeless,” said Doctor Yussuf Addulraheem

The former Super eagles player was the head coach of KFA, Kwara Football Academy in Ilorin.

On Sunday evening, he led his team victory against Malian with 3-0.

Medical sources say he might have died of suspected heart attack.

An autopsy is being carried out as we speak to ascertain the true cause of his death.

Thompson Oliha died at the age of 44.

He was born on the 4th of October 1968 in Benin City, Edo State Nigeria.

He is survived by his wife Irish and 4 children.