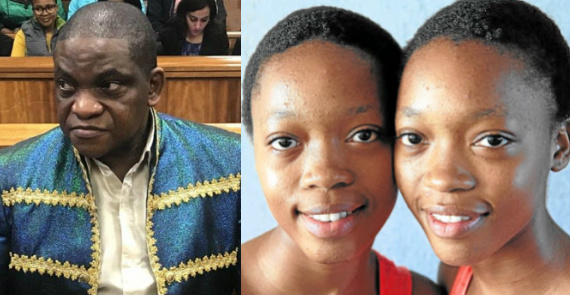 Durban twins Anele and Neliswa Mxakaza of Idols SA 2013 fame’s mother regrets being a member of Pastor Timothy Omotoso’s church.
Nomvula Gloria Mxakaza believed that had she not gone there to worship in 2014, her daughters would not have had any dealings with Omotoso.

Omotoso, a televangelist has been charged with rape, human trafficking and sexual harassment. The senior pastor of the Jesus Dominion International Church was also accused of keeping young female congregants at a house in uMhlanga, north of Durban, where he allegedly sexually abused them.
He was arrested last year and was being held in custody.

The matter is being heard in the Port Elizabeth High Court.

Mxakaza’s 22-year-old daughters will be among those who will testify against Omotoso, 60. Speaking from her home in Chesterville, Durban, Mxakaza said she was firmly behind her daughters.
They were being kept in a safe house, following threats against them for speaking out against Omotoso.

Mxakaza said she supported all the girls who were willing to testify against the pastor.

“He is not a pastor but an evil man. His fake ways have caught up with him. I wasn’t comfortable when Anele and Neliswa went to stay at his house.
“But I do not blame them because they were young and naive,” she said while holding back tears.

Mxakaza who was once a member of Tim Omotoso Ministries said she had left and joined God Never Fails Ministries.
Earlier this year, the twins spoke out against the pastor.

“We were actually pushed to please the man, we were told that God will punish us if we ever say anything against Omotoso. We lived a life full of threats and fear.”
“The rape allegations were not new to us when he was arrested, it is something that we knew long before the arrest,” they said in a statement.

The Mhlanga house which Omotoso rented is now for sale, while the plot of land he bought in Umhlali, on the KZN north coast, prior to his arrest has not been developed.