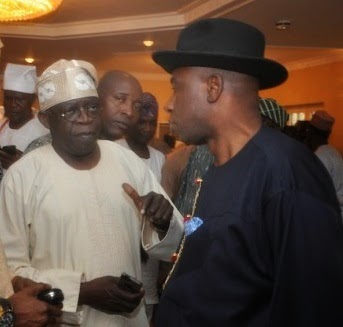 APC National leader Bola Tinubu, has revealed that he was instrumental to the victory of President Goodluck Jonathan in the 2011 general elections.

He said this yesterday during the Ndigbo APC governorship rally held at the Onikan Stadium, La­gos. His words: “In 2011, I helped Jonathan become President because he made us believe he was a breath of fresh air. I didn’t say be­cause he was from Bayelsa that I would not help him. We voted for him because he promised to make our lives better. But now, he has failed us.”

“Igbo have lived here for years, and nobody has discriminated against them. No one would fight them because they are based in their land. No one can de­termine the tribe or fam­ily where he is born; it is only God that can do that. Therefore, everyone must be treated with equality and respect. Today, Nige­ria is no longer safe. But because election is now approaching, the Peoples Democratic Party (PDP) has remembered you. Can they give Igbo shops in Lagos? Can they give their children scholarships? In Lagos, when we give you shops, we don’t ask you where you come from. We let you do your business. We don’t build roads and say Igbo people should not ply them.

Over 500 Igbo are in the Lagos State civil service and we don’t discriminate when it comes to promo­tion,” he said.

“The PDP-led adminis­tration has ruined the econ­omy and that is why many Igbo businessmen are suf­fering now. Because of the dollar exchange rate, the rate of imported goods has increased and has crippled many businesses.”

“The country is no lon­ger secure, but with Gen Muhammadu Buhari as president, he would flush out the Boko Haram sect just as he flushed out Mai­tasine when he was the Head of State. So, I urge every Igbo person living in Lagos to support APC just as the APC government has supported Igbo.”

The governorship can­didate of the APC, Akin­wumi Ambode, promised to empower Igbo youths and make life more mean­ingful by creating a better enabling environment for their businesses to thrive.

Continue Reading
You may also like...
Related Topics:jonathan, president, tinubu