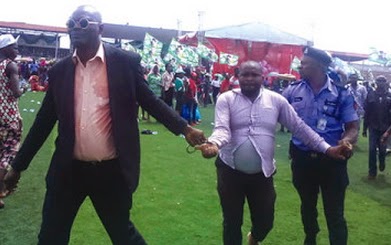 Nigeria’s 1st Lady Dame Patience Jonathan declared on Saturday that nothing would stop President Goodluck Jonathan from completing “our two terms in office.”

“Everybody is staying there for eight years. Now it’s our turn. We must complete our eight years,” she said at a women’s rally in Benin, Edo State.

“It is in the constitution of this country. Two, two terms. We will complete our two terms and hand over.”

She said the opposition should expect what happens to those standing in the way of a moving train. 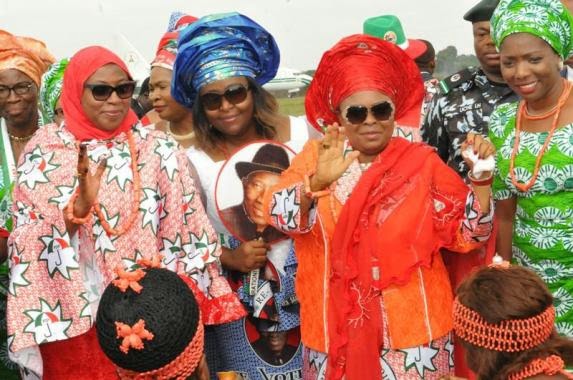 In a veiled reference to the clash in the booking of the Ogbemudia Stadium for her rally and a separate event by the wife of the All Progressives Congress (APC) presidential candidate, Hajiya Aisha Buhari, she charged: “They are dragging stadium with me, but me I am ready to go to the street and do my campaign.”

Governor Adams Oshiomhole of Edo State had earlier given permission for her to use the stadium while Mrs. Buhari’s event was rescheduled for another date.

Making a case for her husband’s re-election, Mrs. Jonathan said: “The president is building schools. That is why in the whole federation when he came in, he built university in every state; federal university so that our children can go and learn.

“In Edo State, the federal university has been rehabilitated and well equipped for us. He gave our sons scholarships. Mr. President is ready to pay if you don’t have money to pay for your children.”

She then returned to the APC, saying: “They were there years back. They have nothing to offer. Ask them: what did they offer us when they were there. They were in Aso Rock before (sic). What did they forget in Aso Rock that they want to go and take? Days are gone when old people will continue to dominate us.

“I don’t have a budget, no constitutional rights. Will you now say I am corrupt? I am not holding your money. I don’t have budget attached to my office. Go and probe me and see if I have your money.”

Mrs. Jonathan and her entourage arrived the rally venue at 1.30 pm about five hours behind schedule by which time many of the party supporters had returned home.

At least two women and three policemen who remained in the scorching sun fainted.

They were, however, revived by medical personnel deployed at the stadium.

The police arrested two young men who claimed to be members of the Peoples Democratic Party for allegedly pulling down campaign banners around the rally venue.

The suspects from Ward 10 in Egor Local Government area said they pulled down the banners because they were not paid the mobilisation fees they were promised.

One of them was heard crying and begging the policemen to “Please, let me off. I have no one to bail me.”

[By Osagie Otabor, The Nation]

Tinubu: I Made Jonathan President In 2011, GEJ Has Failed Nigerians
“Akpabio Wife Is Rude, She Forces Politicians To Kneel For Her” – Sources