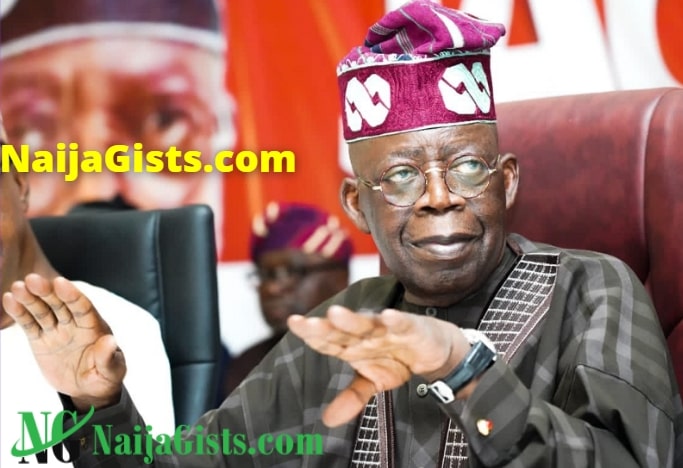 Tinubu Has The Best Strategy & Intellectual Capacity To Rule Nigeria

Its National Chairman, Dr Kailani Muhammad, said this on Thursday at the inauguration of its National Officers and National Headquarters in Abuja.

Muhammad said that all the candidates in the presidential poll had their credibility and antecedents but none was comparable to Tinubu.

“APC Presidential Candidate, Asiwaju Bola Tinubu is a man of vision. He’s charismatic. He has the with and political network across the country.

“That’s why electing him to become the next President of the country would be good for all and will eventually open doors for greater things to happen in the country,’’ he said.

He recalled that when Tinubu was governor of Lagos State, he had a think-tank through which he was able to develop a long-term vision for the state.

“Tinubu ran an all-inclusive government that reflected a mini-Nigeria,” he said.
Muhammad added: “He has turned around the state internal revenue to a more robust and result driven that has placed the state as a financially independent one among the 36 states of the federation.

“Lagos State had survived without recourse to the Federal Government monthly grant.

“The then President, President Olusegun Obasanjo withheld the state’s grants for too long but Asiwaju Bola Tinubu remained creative by making the state an epicenter for development.’’

According to Muhammad, Tinubu has turned so many people into prominent personalities and has the capacity to identify talents that can work positively in attaining his target as a leader.

“In fact, Tinubu is a candidate that has all it requires to be the president of Nigeria. He has more strategy and intellectual capacity than his opponents. He remains the best to succeed President Buhari.

“We are happy that even though the journey was rough and tough the landscape loaded with landmines, yet we were able to weather the storm and our minimal effort and inputs yielded positive results at the end of it all.

“The TSN structure presently is deeply grass rooted in all the 36 states of the federation and the FCT, senatorial district, local government areas and wards across the country.

“We are assuring this gathering and Nigerians that we are strategically positioned for a vibrant result – oriented outcome, more than we recorded in 2015 and 2019.

“By the special grace of God Almighty, our efforts will not be in vain. We shall put in every effort and ensure that all hands are on deck to register election success,” he said.

“And ensure that Sen. Asiwaju Bola Tinubu and Kashim Shettima are sworn in as President and Commander Chief of the Armed Forces of Nigeria and Vice President respectively come 2023″.

In his remarks, the Director-General, One Nation Asiwaju/Shettima Ticket Support Group, Alhaji Muhammadu Etsugale, said the inauguration of TSN was apt and commendable.

Etsugale said that in a democratic process, the group was imperative in marketing the APC and Tinubu/Shettima ticket to all Nigerians.

According to him, the duo has the desired pedigree, courage, competence, knowledge, political will, competence and determination to govern the country.

“All Nigerians can attest to using the candidates’ past public service records as a reference material,’’ he said.