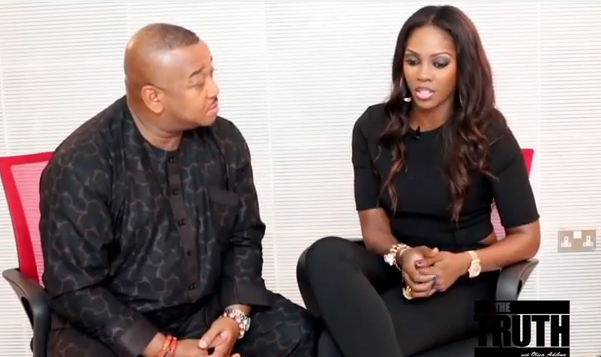 Nigerian songstress Tiwa Savage is yet to admit that her troubled marriage is over.

In a TV interview conducted yesterday, Tiwa Savage employed silence to state the condition of her marriage.

Hear what she said about her controversial wanted video:

“Every woman has that element and that period where they just feel sexy inside.I think I was going through a phase. Yea I wasn’t scared to show it and wasn’t scared of any backlash that was going to come ,because I know that whatever happens,I can always back up any controversy with my talent . The song is my favourite in my album. It might not be most people’s cup of tea in Nigeria, but internationally, they listen to that song and they love it . The guy who produced it is Oak, who produced “Your love “for Nicki Minaj. So I love the song. I’m influenced by Beyonce and by Mariah Carey by Rihanna, Brandy. I’m influenced all the time. I wasn’t thinking whether Nigeria was ready or not, I was just doing something from an artistic point of view.No regrets at all” .

When asked about her marriage problem, she kept quiet and didn’t say a word.

Dotun Oni Is Dead: NAMA GM Killed By Asthma Attack In Lagos, Burial In Ibadan Next Week
“That U All Love Wizkid & Davido Doesn’t Make Me Old School” – 2shotz Fires Back