As earlier reported, Tonto Dikeh travelled to the UK to co-host the concert with Iyanya.

As she stepped on stage yesterday, she appeared very high in spirits.

In the video, a song was being played for her to perform but she refused to stage a performance telling the crowd that she can’t wave because she forgot to shave her armpit.

According to a source, Tonto Dikeh was acting under the influence of an unknown substance yesterday.

The actress later put her hand in her armpit as she staggers and shouts on stage.

After a couple of minute, she fell face flat in front of thousands of audience.

She said a lot of irrelevant things like when she was in America, they showed her love.

As we speak, Tonto Dikeh is doing a lot of damage control on her image. 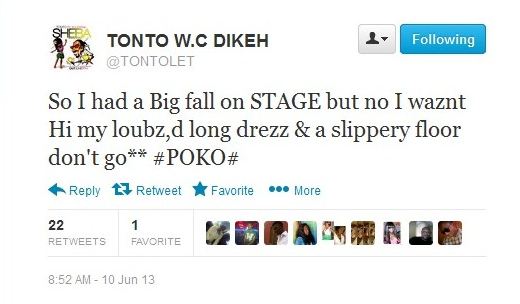 She said her high heel loboutin shoes and her long dress caused her to fall on stage.

She also claims the slippery floor contributed to her fall.

“Linda Ikeji Why Don’t U Have A Husband, Are U A Witch?” – Tonto Dikeh Retweet
Rivers Vs Akwa Ibom State: Governor Rotimi Amaechi & Godswill Akpabio In Intense Political Fight