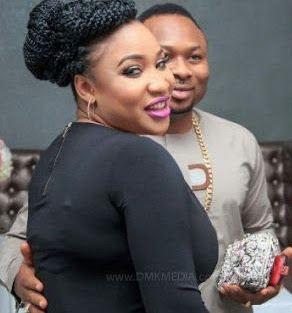 A trusted family source has revealed what led to the eventual crash of Nollywood actress Tonto Dikeh and Big Church Foundation CEO, Oladunni Churchill’s marriage of less than one year.

The source who asked for anonymity said the couple started having trouble in the last month of Tonto Dikeh’s pregnancy when her husband was reportedly seen with different ladies at night clubs in Lagos while Tonto was out of the country to deliver their baby.

When she returned from the US, one of her domestic staff allegedly informed her that her husband had been cheating on her with her beautiful PA, Rosaline Meurer when she was out of the country.

Tonto was said to have confronted her hubby about the alleged affairs and he denied it all.  She then reportedly asked him to sack Rosaline if he was sure there was nothing between them but he declined, saying it was wrong to punish her for something she didn’t do.

The source added that Dunni Churchill’s serial cheating habit soon got into Tonto Dikeh who started behaving violently. She was said to have threw tantrums and broke expensive items in the house at some point.

Tonto was also said to have suffered mood swings, both during her pregnancy and even after having the baby, which was attributed to post-partum depression fueled by the current crisis in her marriage.

The source said her estranged hubby didn’t believe Tonto could pack out until she did.

At this point, family elders have advised Oladunni Churchill to give Tonto Dikeh some time to heal and in due time, she would return back to her matrimonial home.