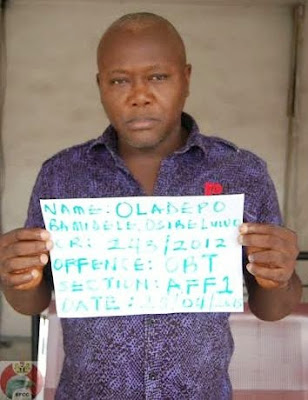 The Economic and Financial Crimes Commission, EFCC, on Wednesday, April 29, 2015 arraigned one Oladepo Bamidele Osibeluwo before Justice Augustine Odukwo of the Akwa Ibom State High Court Uyo, on one count charge of stealing to the tune of N4,623, 600.00

The accused, who was employed as Regional Sales Manager by Topcare Nigeria Limited, a pharmaceutical company, sometime in 2011, allegedly sold some pharmaceutical products worth N4,623, 600.00

The complainant, however, said the accused could not give proper account of the sales recorded. The charge reads: “ That you Oladepo Bamidele Osibeluwo being an employee of Topcare Nigeria Limited, Uyo, sometime in September 2011, within the Uyo Judicial Division, did steal the sum of Four Million, Six Hundred and Twenty Three Thousand, Six Hundred Naira only (N4,623, 600.00), being sales of drugs, property of Topcare Nigeria Limited and thereby committed an offence of stealing contrary to Section 390 (9) of the Criminal Code CAP 38 Vol. II Laws of Akwa Ibom State of Nigeria 2000.” The accused pleaded not guilty when the charge was read to him.

Following his plea, the prosecution counsel, M. T. Iko, prayed the court for a date to enable him present his witnesses for the commencement of trial. However, the defense counsel, Nse Williams, urged the court to grant the accused bail.

After listening to counsel, Justice Augustine said the case should be transferred to an administrative judge for re-assignment on the grounds that only courts 5 and 6 in the State High Court, Uyo Judicial Division handle criminal cases. Justice Augustine refused the accused bail and ordered that he should be remanded in prison custody.

[Official Press Release by The EFCC]