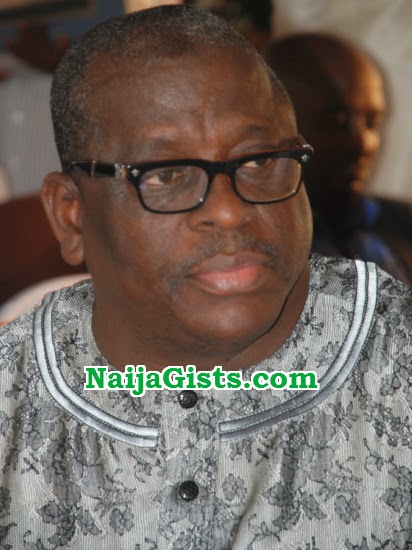 May 4, 2015 – Ex-Drug Dealer Wanted In US, Senator Elect Kashamu Sues EFCC & IGP Over Plans To Extradite Him

Prempting his likely extradition to the United States for alleged drug offences, Senator-elect, Prince Buruji Kashamu, has dragged the Inspector General of Police (IGP) and 11 others before a Federal High Court in Lagos to forestall such move.

In an Originating Summons brought before Justice Okon Abang, the Peoples Democratic Party (PDP) chieftain alleged that there was a conspiracy between the law enforcement agencies of Nigeria and the U.S to humiliate as well as prevent him from being sworn-in as Senator.

Others are – the Clerk of the National Assembly; the National Security Adviser to the President; Independent Corrupt Practices and other Related Offences Commission (ICPC); Nigeria Custom Services (NCS); Nigeria Immigration Service (NIS) and Nigeria Security and Civil Defence Corps (NSCDC).

Kashamu is seeking nine declarative orders from the court to restrain the defendants from arresting, detaining or otherwise effecting his abduction upon spurious allegation, that defendants’ actions are illegal, unlawful, ultra vires and a breach on his rights.

He also wants the court to direct the clerk of the National Assembly to accord all facilities and privileges due him as Senator-elect.

When the matter was called for hearing on Monday, counsel to the EFCC, Rotimi Oyedepo, who said he was yet to see the court processes, prayed for an adjournment to enable him find out which of the agency’s offices was served.

He told the court that the commission was yet to reply to the suit because he hasn’t laid hands on the processes.

Apologising for stalling the proceeding, Oyedepo noted that it would be in the interest of justice if EFCC was given a short adjournment to reply to the suit.

But lawyer to the applicant, Dr. Alex Izinyon (SAN), urged the court to discountenance EFCC’s application for an adjournment, on grounds that the matter should be determined expeditiously.

He argued that there was no material fact before the court to exercise its discretion, adding that since EFCC had conceded that they were served and failed to respond after 12 days stipulated by Order 8 Rule 3 of the court, there was no room for extension.

Aside the EFCC, the NIS also pleaded for a short adjournment to enable its lawyer reply the applicant’s brief.

He told the court that the NIS has not been able to respond to the application as a result of the ill health of its counsel.

[Reported By Precious Igbonwelundu, The Nation]