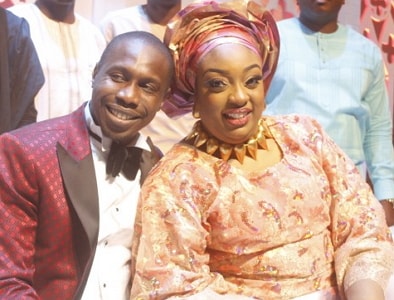 Tope Adebutu: Jonwo Obasanjo’s Abandoned Me In Monaco During Honeymoon, His Mother Caused Our Marriage Crash

By Adetutu Audu, The Nation

When Premiere Lotto boss,  Kessignton Adebutu’s daughter Temitope Adebutu was tying the knots with former President Olusegun Obasanjo’s son, Olujonwo, exactly a year ago in a lavish wedding ceremony, nobody envisaged that they would turn enemies.

Olujonwo is alleged to have reported Temitope to her employer, the Ogun State Judicial Service Commission and filed a case against her at Magistrate Court in Lagos Island over allegations of domestic violence. The estranged husband alleged that his wife subjected him to repeated acts of domestic violence, as well as threatened to kill him.

Following the recent development, the Adebutu family has risen in defence of their daughter, accusing their son-in-law of being economical with the truth.

A source close to the family revealed that Temitope is a gentle lady with proper upbringing. She has never hurt a fly all her life. The man is just looking for a way to tarnish her hard-earned image.

Before the wedding in 2017, it was gathered that he got a contract from Tope’s brother, Segun, who is the CEO of Petrolex Oil and Gas. The younger Adebutu did that to help Jonwo. “Aside the fact that Jonwo didn’t have enough money to maintain his home and wife, the marriage suffered constant interferences from his mum, Taiwo Obasanjo.

Also in a counter affidavit sworn by the estranged wife, she stated that trouble began to rear its ugly head right immediately after the wedding when he began to treat her with belligerence, cruelty, reprehensible and unwarranted hostility. It was stated that this treatment continued to negatively affect their marriage to the extent that he allegedly left her to travel to the principality of Monaco alone on 17th of June, 2017 for their honeymoon only to come five days later.

She also stated that during the few times they spent together, he was fond of calling her unprintable names including but not limited to ugly, fat, smelly, cancer. He always used to torment her with expressions such as ‘I married you out of convenience’, ‘our wedding was a sham, if I didn’t marry you, no one else would’.

It was further stated that she endured this trauma till March this year when the young Obasanjo approached her after allegedly deserting him for over four months and informed her that he was no longer interested in the marriage.

It will be recalled that Olujonwo’s mother, Taiwo Obasanjo, made a fuss about the wedding last year when she went to court to stop it. According to her, she had received a spiritual warning against her son having a big wedding and that if he wanted to throw an elaborate wedding at all, it must be done after his 34th birthday in June. Despite her pleas and objection, the wedding took place with the full support of their fathers in May 2017.

WWE Wrestler Matt Cappotelli Is Dead: Tough Enough III Co-Winner Dies Of Brain Cancer At 38
Nollywood Actress Ifeoma Okeke: I Used To Drink 2 Cartons Of Beer A Day When I Had Issues With My Boyfriend