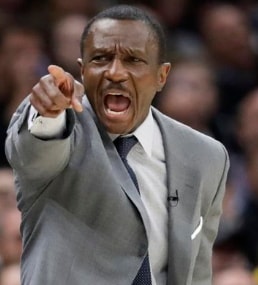 Despite his club’s humiliating defeating to the Cleveland Cavalier on Monday, the head coach of the Raptors has been honoured with an outstanding Coach of the Year award.

Dwane who started coaching the Raptors in 2011 led the team to an Eastern Conference-best 59-23 record, the best mark in franchise history.

During his tenure in Toronto, Casey has guided the Raptors to five straight playoff appearances and three consecutive 50-win seasons. However, after being swept by the Cleveland Cavalier again, there have been reports that the Raptors are “leaning towards” a coaching change this off season.

Continue Reading
You may also like...
Related Topics:coach of the year, dwane casey