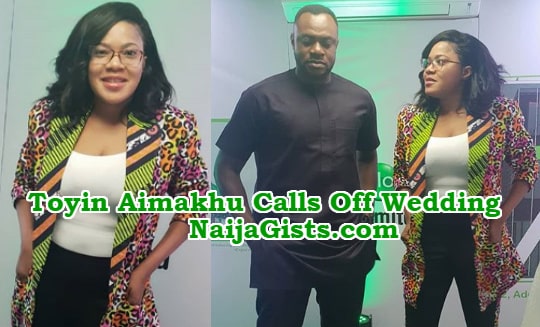 Toyin Abraham Aimakhu Calls Off Wedding, Breaks Up With Fiance Over Trust Issue

Nollywood actress Toyin Aimakhu Abraham has dumped her fiance and the engagement ring he gave her.

The actress who before now was planning to get married in few weeks time reportedly dumped her fiance over a mild drama that reportedly happened last week.

Although Toyin’s publicist said the actress and her Abuja-based lawyer fiance broke up over unknown reasons, a Nollywood source close to actress said lack of trust caused the actress to change her mind.

The source who broke this to NG this afternoon said the actress believes a broken courtship is far better than a broken marriage.

Toyin Aimakhu who accepted Barrister X’s proposal on Thursday the 17th of May 2018 has since returned the engagement ring to him.

The actress has been covering up her ring finger since the news broke today.

Pictured above is Toyin and actor Odunlade Adekola at a Glo-sponsored event which held this week.

How To Deal With Toxic Siblings Who Don’t Like You
Princess Rita Dominic: I Will Marry When I Meet The Man Of My Dreams, No One Can Force Me Into Marriage