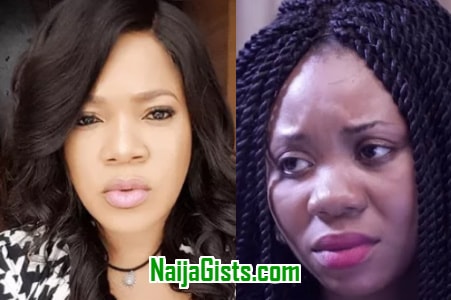 Newly married Nollywood actress Wunmi Toriola recently came under fire after she uploaded an attack video against Toyin Abraham on her Instagram page.

In a recent encounter with Punch NG, the actress revealed what led to their initial brawl.

“After we shot Alakada Reloaded, we were in a hotel rooms and she slapped me. I was very angry and I would have hit her back if not that I loved her. After she slapped me, I walked out and went to another room. The following day, I expected her to apologise to me but she just told me to bring her belongings in my car. She was not apologetic at all.

“Before I got home that day, she had also told other people that she slapped me and I was upset that she was even proud of what she did to me. Because of that, I made a video on Instagram and I told her never to repeat such act; I just wanted her to feel sorry about her action. She then called some elders in the industry and those ones prevailed on me to bury the hatchet. So, I deleted the post online.”

She has since reconciled with Toyin after she tendered an apology.

Mimi Orjiekwe Regrets Being An Actress, Says There Is No Money In Acting
Sunday Inspiration: Covenant Gateways To Financial Dominion!