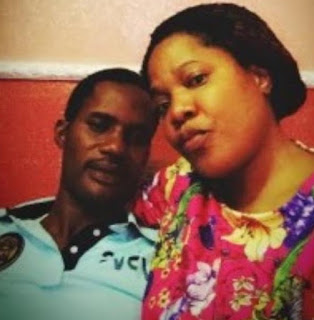 Popular Lagos socialite and filmmaker Seun Egbegbe has confirmed that he is indeed the only man in Toyin’s life.

In this exclusive chat with E247, Mr Egbegbe revealed how he allegedly beat Toyin at a hotel in Lagos.

There was a report you beat your girlfriend, Toyin Aimakhu while she was working in a movie location, collected your car gift from her, what exactly did she do to make you act that way?

She actually went to a movie location on November 20, and I travelled out of the country to Dubai a day before that, that is November 19. I got back on 28th November, so how could I have been in Surulere to collect my car from her on location when I was in faraway Dubai?

What about the fight that reportedly broke out between you and her at Jabita Hotel?

That was like a normal argument that happens between a boyfriend and girlfriend. There were lots of people there that day, so I knew it would leak to the press. That’s different from reporting something that never happened. That actually happened but it was a minor fight.

So why did you take her to the hospital after the quarrel?

Uhm…if you know what happened ehn, you will pity me.

I don’t want to talk about that now. The truth is that there’s no issue between Toyin and I. I wonder why people are taking this thing far; I’ve known Toyin for more than 15 years now.

But there are reports, she’s pissed off and she’s moving to Ibadan to open a film school?

She has been saying she wants to go back to Ibadan now for over a year; even before we got back together. It’s not like she’s moving back to Ibadan because of Seun Egbegbe.

Will you be surprised if she goes back to Niyi Johnson?

If she goes back to him today, I will wish her well. She’s an adult and she knows the best thing for herself. If she goes back, it means she has decided that it’s better for her to do that. All I can do is to pray for her, that no harm should befall her.