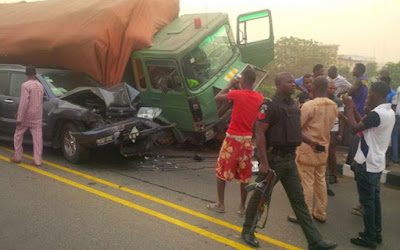 Tragedy struck at Ofumwengbe in Ovia South West local government area of Edo state at the weekend as a truck crushed a father of five and his two sons.

Mr Joseph Adeke, a farmer. and his two sons 15-year-old Jeffrey and Ovie (13) were crushed by a truck owned by an Abuja Federal Court of Appeal.

“The man went to pick the children who were in SS1 and JSS1 of Evergreen School, a private school in Ofumwengbe, and was on his way home when they were run over by the truck.

“They were riding on a motorcycle and the truck, which was carrying some papers (documents) had brake failure and the driver lost control,” an eyewitness told our reporter.

The driver of the truck, whose identity was not immediately known, was arrested and taken to Iguobazuwa division of the Nigerian Police.

Attempts by our reporter to speak with the Divisional Police Officer was abortive as he was said to be “unavailable” when our reporter visited the station on Sunday afternoon.

The truck, which was sighted at the station premises, had its plate number removed.

The grief-stricken mother and wife of the victims, Mrs Helen Adeke was too devastated to speak.

But a member of the grieving family, Mr Tony Odoyibo, confirmed the report in a telephone chat with our reporter.

Odoyibo described the incident as “a grave loss to the family. The two children are the oldest sons.”

Our reporter’s attempt to get confirmation from the Commander in charge of Okada Junction of the Federal Road Safety Corp (FRSC) was abortive.

Although he promised to get back to our reporter, the commander was yet to return our call over one hour later before press time on Sunday.

The Last Batch Of The 230 Assyrian Christians Kidnapped By ISIS In Syria Released
Photos: Another 46 Awawa Cult Group Members Arrested In Agege Lagos