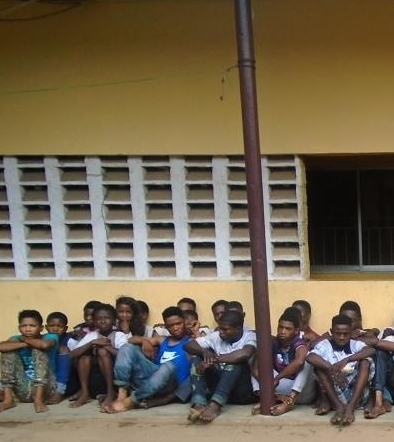 The Lagos State Rapid Response Squad (RRS) over the weekend arrested no fewer than 46 suspected members of the Awawa confraternity including six women.

Members of the Awawa cult group have reportedly held Agege and its environs hostage for some months now, robbing and raping their victims.

The cultists, who are identified by similar tattoo symbols beside their eyes, on their backs and hands, usually moved in scores to unleash terror on their victims.

It was gathered that the suspects were nabbed on Saturday morning, during a three-hour operation led by an Assistant Superintendent of Police (ASP)Timothy Ojetunde.

Operatives were said to have responded swiftly to a tip-off from two victims who were dispossessed of their valuables in Agidingbi towards Omole and Akilo Roads.
The operation was said to have been triggered by complaints from residents on the activities of the hoodlums around Agege, Ogba and Agidingbi, Ifako Ijaiye, Iyana Ipaja and Abule Egba.

It was gathered that the suspects who attempted to resist arrest by pelting security agents with stones, threatened to make life unbearable for the policemen.

According to a police source:

“Apart from incessant complaints from the residents which we received on daily basis in our office alleging that some group of young boys and girls with ages ranging between 15 and 22 years, were making lives difficult for residents and disrupting the peaceful atmosphere in Agege and its environs, they equally raped, looted, snatched and dispossessed law-abiding citizens of their belongings.

“During their recent attack along Agindigbi Road, we were able to arrest 46 of them including 6 female while others manage to escape. 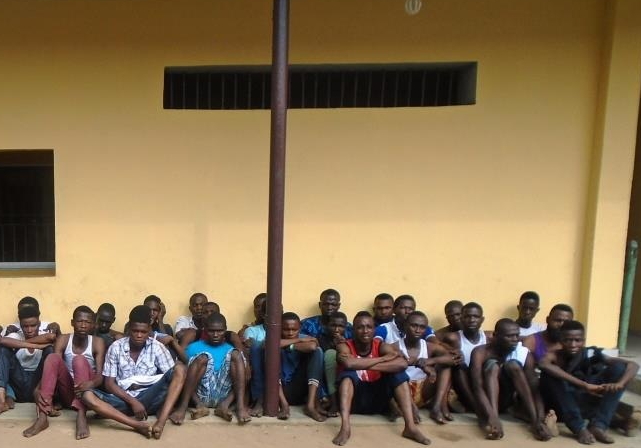 “Having studied their black spots and based camps around Agege and its environs, and several petitions received by the policemen from the residents of the area, we carried out a special operation on the areas identified as their hideouts.

“Before we could make arrest these suspects, they engaged us in a fight, stoning us with pebbles and broken bottles but our men remained unshaken.
“On arrival at the RRS Headquarters in Alausa, the suspects were still threatening to make life unbearable for policemen, shouting vociferously that no one can arrest them and go scot free.

“They still have the guts to be threatening us that if we don’t let them go, their colleagues who are yet to be arrested, would besiege our base the following day and set them free. But we are more than ready for them.”

One of the suspects, Arowoseni who confessed to being a member said he was forced into the group.
“I was forced to join them on the account that I would be very powerful among my peers. They promised me that I would have free access to girls who are members of the group. One thing is certain, once you join the group, it would be very difficult to dissociate yourself again.

“And you must also be part of their proceedings and operations anytime they are set to go out. We loot, rape and rob innocent members of the public everytime we were at operation. We don’t fear anybody even police because we are always in hundreds.”

Confirming the arrest, Police Public Relations Officer, PPRO, Dolapo Badmus, a Superintendent of Police said that Awawa cult group is a violent group whose activities are under the close watch of the police.

“We are after them. Their financiers and leaders are our targets, with those in our dragnet, the tide is against them,” she said