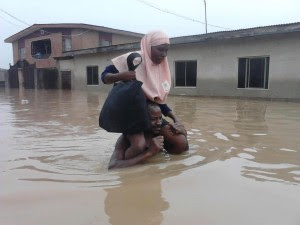 The incident happened yesterday while the children were returning home from an evening Islamic school.

The father of the deceased girl, Mallam Baldano said they were taking shelter from the rainstorm in an uncompleted building when it caved in on them.

Baldano said while Zainab died, the other three sustained various degrees of injuries including fracture.

The injured children are receiving treatment at an hospital in the area.

Hungry University Graduate Steals Biscuits From Trader In Badagry Lagos, Gets N50,000 Bail
The Day Saidi Caught Fathia Balogun With Some Men At A Restaurant In Ikorodu Lagos – Femi Branch