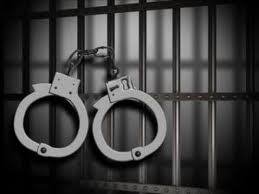 Tragedy struck on Sunday in Abule Taylor area of Lagos when a man in his mid 40s, Peter Odion, allegedly killed his wife during an argument.

According to Punch, the woman, popularly known as Mama Marvellous, met her untimely death when the argument degenerated into a fight.

It was further learnt that Odion, in a bid to free himself from her wife, dealt a devastating blow to her.

An eyewitness, who craved anonymity, said as soon as Mama Marvelous became unconscious, sympathizers rushed her to a nearby hospital.

But the eyewitness said the hospital rejected her and advised that she should be taken to the General Hospital, Ile-Epo, where she gave up the ghost.

He said, “It was like a play when the argument started. I don’t know the basis of their argument but as soon as they came out of church talking to each other rashly, fighting ensued.

“The man (husband) who wanted to free himself from his wife could not. Hence, he gave her blow. As soon as that happened, she fainted. Onlookers rushed her to a nearby hospital but she was not attended to. After that, she was taken to a General Hospital at Ile-Epo where she was certified dead.

“I still find it difficult to come to terms with what happened. I think the Devil was at work. If not, how else could one explain the nasty thing that played out? Two believers just finished from Sunday service only to be fighting. And now, one is dead. It is such an unfortunate incident.”

Our correspondent gathered that Odion had been arrested by the police and was being detained at Ile-Epo Police Division in Agbado-Okeodo Local Council Development Area of the state.

“It is true. The man (husband) is not denying it. They were fighting and the woman fell into a coma. She was rushed to a nearby hospital where she was certified dead,” Jaiyeoba said.

He said the case would be transferred to the State Criminal Investigation Department, in Yaba, Lagos.