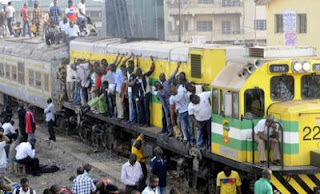 A young man met his untimely death this morning at a popular train track in Bolade area of Oshodi Lagos very close to the Arena Market.

According to an eyewitness report, the unidentified man was walking with his friends when the train crushed him.

The eyewitness said while the train was coming, the deceased friends warned him, they even tried to pull him off the track but he refused.

Minutes after his refusal, the fast moving train crushed him into pieces.

“I went to Bolade/Oshodi to buy some items. While trying to buy the items, I saw some young men walking on the railway tracks while the train was coming from Agege. Suddenly I saw some men telling one of their friends to leave the tracks but he refused, only to be crushed a few seconds later.” – the eye witness said

The deceased remains has been packed by his friends.

Do you think his friends could have done better to save his life?