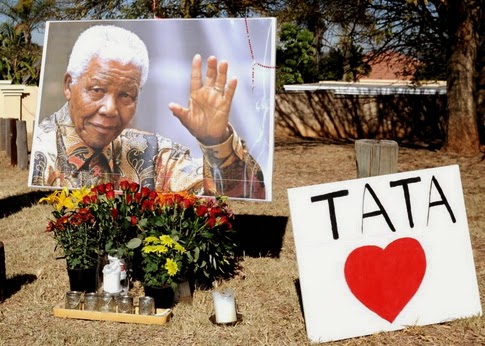 Sorrow fills our hearts this sad moment, a sorrow that is deep and personal. Nelson Rolihlahla Mandela has silently closed the door of life and departed from us. Our lives will be empty in the areas that he had brightened for us.

Albert Einstein said, “The value of a man should be seen in what he gives and not in what he is
able to receive.” In one word, Nelson Rolihlahla Mandela was a man who gave. He gave much to his work, to Fighting Racism and Injustice, That is why I like to write in celebration of his life. Here was a life that demand notice….a life that exemplified brilliance…a life that inspired emulation…a life that burned so that others’ paths were lit.
Nelson Rolihlahla Mandela was a strategic thinker, a visionary who was brilliant, innovative and creative. As such, he contributed much to the Liberation of South Africa from their colonial masters.  He generously gave us his knowledge, his expertise, his skills.

Nelson Rolihlahla Mandela was deeply concerned with improving unity and he was very active in the quest to stabilize Africa Politically and Economically.
Nelson Rolihlahla Mandela was living proof of how fine a person can be. He was a good boss to the people in his charge, a loving husband to his wife, and a devoted father to his children. He was also a good friend to many and a fellow advocate to some. The character of the life he lived might be summed up in a few words: he was sincere, he was earnest, he was loyal.
As President of South Africa from 1994 to 1999, he led his country in such a way
that he exemplified leadership. He gave energy, commitment and inspiration to his Fatherland and to others with whom he worked.
The Nelson Rolihlahla Mandela  I remember was a happy man, one who not only was cheerful in himself but who gave much cheerfulness to others. He had a beautiful smile, a sense of humor and a gentle demeanor.
Nelson Mandela was bright, logical and systematic in his thinking. He was always willing to share his ideas and information. He was passionately interested in helping others . Many  found him to be a splendid person of great intellect and a big heart.
In his Position as South Africa’s President, he worked with passion, integrity and energy. By his death all the people who knew him will miss a highly intelligent, vibrant individual with a rare friendliness and charm of personality.
Nelson Rolihlahla Mandela was a genuinely warm and wonderful individual —one we will miss greatly. Our sorrow is lessened only slightly with the comforting thought that we had the privilege to know him.