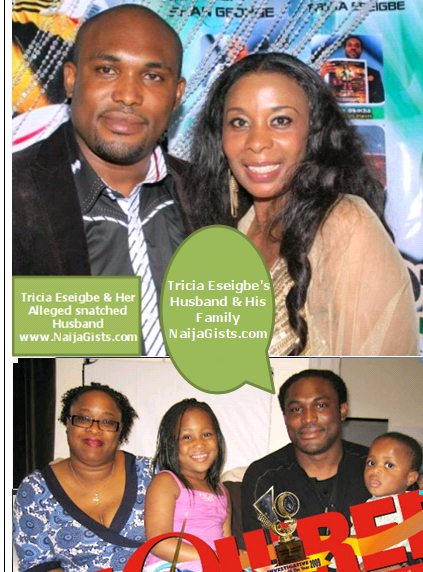 This story is similar to a very popular movie story line. This shocking revelations currently trails the 3 years marriage of a reknown TV personality, actress who turned the producer of Bold Faces-a celebrity oriented magazine programme that runs on DSTV and probably other terrestrial stations, Tricia Esiegbe-Kerry.

According to National Enquirer, 3 years down the lane, after her society wedding that drew notables from the Nollywood industry and also football stars (at least Julius Aghahowa and Celestine Babayaro were there), Mrs. Tricia Esiegbe-Kerry seems to have reasons to face the public and tell them how well she knows the man she married in a colourful gathering of who`s who and in a prestigious venue, Best Southern hotel, Lekki, Lagos sometime in the tail end of 2009.

It is pertinent to know that, at their wedding which had the award winning Nollywood director, Kingsley Omoefe as best man in 2009, the bridegroom, Kingsley Kerry had threatened and warned everybody most especially members of fourth estate of realm that should anybody write any rubbish about him regarding his new contracted marriage, the fellow would not just regret his/her life but sell family properties to pay damages resulting from libel.

In his closing speech at the wedding, Kerry having surveyed his guests round later turned his gaze at the direction of the Nollywood personalities who were sandwiched with invited members of fourth estate of realm and says thus,: I want to tell the press that, if they ever think that they can use our wedding to sell their papers, they`re in for a sucker punch, anybody that write rubbish about my wife and I will go for it, you guys will pay and go to jail, I mean it, you guys will know that, I am a true Edo born”, a quotation from his threats at the wedding three years ago. 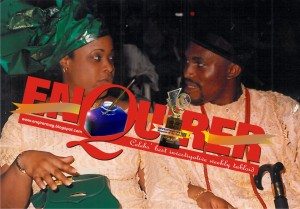 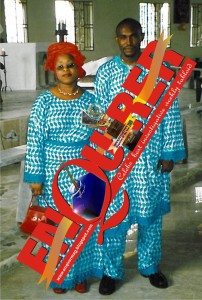 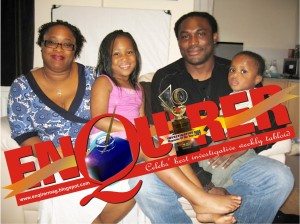 Tricia Eseigbe’s Husband and his family

And as if that was not enough, the chairman of the wedding that evening in person of Paul Obazele also has this message to pass to the guests, “whoever makes any attempt to rubbish the union in the papers will go to jail and the families of the fellow would pay dearly for it”, Paul swore. Please read the bromide and full text of our coverage on their wedding three years ago by the right.

This office was fortunate to be one of the few media that covered the society wedding and we were so amazed at the level of caution and cold attitude displayed by the hosts to their guests instead of showing appreciation for honouring the joyous occasion, all these, put together were what gave us the premonition that, there`s more to the marriage than meets the eyes because a clear conscience fears no accusation. We however got the lead that eventually traced our path to what can best be described as another husband snatching tales and a bigamy case.

The dateline was last Thursday, June 28th, 2012 when this lazy reporter found his way to the vicinity of Ikeja High Court and as fate will have it, we saw the very husband of BOLD FACES producer, Tricia Esiegbe-Kerry coming out of Court 34 in company of a lawyer with an agitating expression.

It was the mood that gave him out that, something is definitely amiss, and this was what drove our interest as we began to dig to know why he was in court. We couldn`t lay our hands on any document on that day but we got it on good authority that it is a case of divorce in which Mr. Kingsley Kerry (Tricia`s husband) is involved.

Tried as we could after spending some money without yielding any effort, we called to ask if he has any divorce case in court because we saw him coming out of court 34 and were told the divorce case is his.
And this is his response, “I don’t know what you`re talking about, I don’t have any case and I never gone to any court, maybe not me, please cross check very well, it`s far from the truth”, he told us.

We were however surprised when our dependable source who had promised to get us the documents made available an exclusive court papers which revealed that a Kingsley Agbroje has served one Mrs. Obiageri Agbroje of Flat 12, ZAPOTECH House, Chilton Grove, Rotherhithe, SE 8, 5 EG, London a divorce paper with Suit No.: ID/63HD/2011 to appear before honourable Justice Y. A Adesanya of Court 34 on Thursday, June 28th, 2012.

This gave us a renewed hope and vigour that we`re inching towards breaking another earth shaking story, and the first approach was the initiative to speak to Tricia Eseigbe to see if she`s aware of the divorce case, “Can you please address me properly, am not just Tricia Esiegbe, I am Mrs. Tricia Esiegbe-Kerry, Kerry is my husband name and can I call you back, am actually at STB Mccan to see the Client Service lady for a deal regarding my programme, Bold Faces” , her response when we called her the first time and when we eventually spoke and told her that it looks like her husband is married in the UK with two kids, she denied that fact, “look, there`s nothing like that, at least I know that, this can never move me, my husband and I are always in the U.K and I`ve not encountered anything of such, we travel together every time, do you know that, my mum and siblings live in the UK, am just the only one here, in fact, my husband just came back from Ghana where he`s gone to seal a deal, so nothing like that, I can go to sleep”, she told us with full authority.

We asked her further if she knows her husband as Kingsley C. Agbroje and also aware of one Mrs. Obiageri Agbroje whom he`s likely to be married to in England before her and she told us CAPITAL NO, his other name that I know is Onajite, he`s Kingsley Onajite Kerry and there`s nothing like he`s married or he was married to anyone anywhere under this earth, I am his only wife, and I hope you`re aware that we`re legally married, we did our registry after that traditional you all came for in 2009. So get that into your head, right! Look, remember you guys have done one story about me that I didn’t like, if you make such mistake again, I won`t take it lightly, am dead serious this time.

With this, we knew we have to be very careful so as not to mislead our legion of readers thereby malign the person of hardworking Mrs. Tricia Esiegbe-Kerry and her easy going husband, Kingsley.

At first, it looked like a dead end but the thought of the London address Flat 12, ZAPOTECH House, Chilton Grove, Rotherhithe, SE 8, 5 EG, of the respondent, Mrs. Obiageri Agbroje encouraged us to burrow the more.

The investigative adventure, even though capital intensive saw us combing the city of London where we fortunately met Susie who claimed to be a very close friend of Obiageri and told us she`s not home and would not even want to talk to press about anything like that, “yeah, what do you wanna know, am Stephanie`s friend, Obiageri is her native name and she`s not around, Susie told us as she stepped out to start going to her house.

We were however able to talk to Susie who told us that, Kingsley`s full names are Kingsley Kerry Onajite Agbroje and he knows me very well, he`s Stephainie`s (Obiageri) husband and she has two kids for him, Michaela 9 and Jamie 6, a boy and a girl. And that`s not all, do you know that another Jamaican girl, Alesha also had a set of lovely twins for Kingsley, I think they`re like 3 years now, Tyrese and Tyrick, anyway that itself is an episode on its own.

Tracing the genesis of their liaison, we gathered reliably that, Obiageri who had always lived in England met Kingsley in one of her holidays to Nigeria in 2001 through a family friend, Chuks Mordi and no sooner they met than the cupid arrow arrested both of them and they got married in 2002.

When they were planning for the wedding, Obiageri had to borrow fifteen thousand pounds sterling in England to foot the bills when her fiancé could not take care of the wedding and we also gathered Obiageri who hails from Mbano in Imo State was instrumental to Kingsley`s first ever journey to England including his visa, ticket and accommodation till he got his British Passport before he dumped her in 2009 to marry Tricia Esiegbe.

This office was so curious to demand why the poor woman had kept mum all this while even after hearing that, her husband and father of her two kids had contracted another marriage back home in Nigeria and the reply we got was that, Kingsley had not been a good husband either, even when they were living together in England, he was not providing for the kids, he was always womanizing, at least he got a Jamaican lady pregnant and disowned the twins she had for him, so shouting to the public will be tantamount to looking for a cheap publicity, she has left her for God and Laws of Kamal if there`s any but he was the one who triggered this by coming to drag somebody who has been taking care of the kids single-handedly for years to court for a divorce, what for, it`s all bullshit, we gathered.

Further investigations on the identity of Tricia Esiegbe`s husband revealed that, the man who hails from Isoko tribe, Delta State worked at St. George`s Hospital, South West London for a while. The divorce case has been adjourned to the 17th of June, 2012 and we learnt no lawyer represented Mrs. Obiageri Agbroje on the first day and Kingsley`s counsel is working on fast tracking the divorce case and some of his prayers is that, the court should dissolve the marriage on the grounds of irreconcilable differences and that, they`ve lived apart for more than two years.

We`ve however resolved to cover the matter on the next adjourned date and planning to have an exclusive interview with Mrs. Obiageri Agbroje in London sometime next week and we shall also follow up on Kingsley and her Lagos wife, Tricia Esiegbe, maybe after they`ve read the story for their own side since they didn`t know what we were talking about when we got in touch with them the first time. Please keep a date for the second part of the life of Kingsley Kerry in London and his deal with the Jamaican lady, Alesha who bore him a set of lovely twins. (Enquirer magazine)