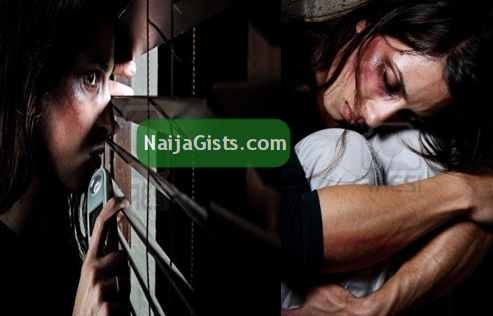 Oct 16, 2012 – True Story Of A Woman Who Survived Years Of Abuse From Her Husband

Well I have a testimony from a woman who once live with a man who battered her and its been twelve years now, she is still standing strong!

Here are some of the times I didn’t leave my partner: I didn’t leave him when he hit me so hard that he paralyzed my diaphragm and I couldn’t scream for help. I didn’t leave after neighbors had him arrested, or when he grabbed me by my throat and dragged me around the house, or when friends and family begged me to leave. I did not even leave when he threw me against the floor while I was six months pregnant. Did I think about it? Of course I did.

I thought about it every single time he raised his hand to me. Sometimes I even did leave–for a night, for three. But I always came back, because as any battered woman can tell you, the leaving can feel harder than the abuse. Most of us carry with us a wretched crib sheet of times we should have left, and that list just keeps getting longer. Here’s the story of how I put an end to mine.

Meeting Scott* was like meeting the rest of my life. He was gorgeous, a successful male model. I was a model too, and a single parent– devoted, but also wild and a little unsettled. He came into the picture and love-bombarded me, constantly telling me that I was the most beautiful woman in the world, asking to spend every waking minute together. He took on my baggage (and believe me, I had some). At that time in my life, I was convinced that I needed a husband and a father for my son, Christian. I believed that being with Scott transformed me from a statistic–another woman in the hustling streets with a baby and no man–into half of a perfect couple.

We moved in together after just three months. Scott brought in everything plus a vicious temper and a need for control that I hadn’t known was on the packing list. The fights were ugly. He’d call me “slut” and “whore” and told me that a sexual assault I’d suffered while we were together was my fault. His words destroyed me, but I thought that if I kept Scott happy, I would have a partner and a proper family for the first time in my life, something I desperately wanted.

So instead of removing myself from the situation, I became hypervigilant. I would make myself sick trying to follow all of his rules, constantly reassuring him that I wasn’t cheating and telling him that I’d always be there to take care of him. Slowly, I became estranged from all of my friends. (Scott thought that everyone–male or female–was “trying to sleep with me.”) I became totally isolated from the rest of the world and, unsurprisingly, completely miserable.

It went on like this for years, him slowly exerting more control over my life, and me letting it happen. I stopped modeling and took on menial work–the only work Scott would allow me to do.

My primary job, of course, was punching bag. Whenever Scott felt insecure or uncomfortable, he let me have it. This abuse was only emotional and verbal (though that was bad enough; the things that came out of his mouth couldn’t be printed in this magazine), until it wasn’t.

About a year and a half in, we rented a new apartment because I was pregnant and we needed more space. On our way to pay the landlord, we got into an argument about money. I showed him a stack of bills and reminded him that I was the primary breadwinner.

In response, he grabbed my shoulder and shoved me hard against a wall. I was startled, more shocked than scared, and threw the rent money at him. Scott immediately switched back to normal and apologized profusely, saying he had no idea what had happened and swearing he’d never touch me again. know this: At no point did I think to myself, Oh, he says he won’t hurt me again, but that’s what they always say. There are patterns to abuse, but they never feel like your patterns. A woman can take herself to the grave thinking that she is the exception, not the rule.)

Three months later, he broke that promise. We were having a heated discussion over what to name our future daughter. He grabbed me by the hair and yanked me to the ground. I stood up and, in self-defense, cracked him on the elbow with a plate. He exploded and dragged me through the house. I left that night, taking a long, sob-filled subway ride with my son and sister to a friend’s house. The next day, Scott called and told me he loved me. He was sorry. He didn’t want to be apart. We were a family,I can still remember those words. Please don’t break us up. And I was back home in three days.

Did he hit me again? Of course he did. He hit me too many times. (Once should have been too many.) My son witnessed that violence, a tragedy I will spend the rest of my life trying to forgive myself for. I finally left for the love of something bigger than myself–I left for my children. I’d like to say that I loved myself enough to do it for me, but women in my situation rarely do.

About two years after the baby-naming incident, I was sitting in the living room when I heard Scott yelling at 5-year-old Christian for removing the tag from a stuffed item that he just bought from the market, so shocked at the sight and sound of his voice, I told my husband to leave Christian alone. He bent down, picked my son up, and threw him across the room as if he were casually tossing a football to a wall.

My son landed on his bed, unhurt but completely stunned. I’d made a promise to myself to endure Scott’s abuse for the sake of my family as long as he never laid a hand on my kids. Now all bets were off. It finally clicked that things were only going to get worse
I sought the assistance from and NGO that deals with battered women Together, we filed a permanent order of protection against my husband. One of The caseworkers introduced me to other women who had been abused–and none of them pointed accusing fingers at me. My sense of isolation began to and I realized that I had stayed in an unhealthy, abusive relationship for five years because of those first three happy months. Not a good time ratio, I know, but probably not a rare one.

In many ways, my path away from Scott was a typical one, But I did several things that were a little off the books, and I think they were some of the most helpful. During the “violence years,” I had kept a journal of Scott’s abuses. I’d sit sobbing in our room–apologies pouring in from behind the locked door—and I will force myself to write down every gory detail: each cut and bruise, every poisonous word and threat.

And After I left, I started to reread those entries daily, making myself reckon with the abuse that I’d endured. Scott was funny and charming, and for years all it took was a hug or a laugh to melt me right back into his arms. Revisiting those false promises helped me see the patterns I’d been ignoring for so long. I also forbade Scott from ever coming back into my home, because I knew that if he got inside, he’d convince me to give him another chance which I would have.

I lived at the bookstore, poring over every book about abuse I could find. That self-education taught me that I didn’t make Scott the way he was, that a man like him would always hold me back, and that children who grow up around abuse are many times more likely to end up becoming batterers or domestic violence victims. Every story I read was like another stitch in my wound–I wasn’t alone in this. Women could leave. I could be one of those women.

The day that Scott moved out remains one of the proudest days of my life. It was like a massive sense of peace just marched right into our home and stayed there. We slept better. We laughed more. My son stopped having nightmares. I stopped waking up worrying about what the day was going to hold, and found excitement in knowing that I was the person in control of my future. I started reconnecting with old friends, and slowly a new, safer life began to emerge.

I won’t pretend that leaving Scott was all it took to make me feel truly content and happy. Leaving an abuser is the beginning of a long road to psychological freedom, and it would be years before I had a clean bill of emotional health.

Fears of abuse were replaced with new ones: How would I support my family as a single parent? How would I ever get my kids to trust me after they’d endured so many empty promises of leaving?

With the help of an NGO and all of those books), I began to seek out a career, something I could get excited about and that could provide an income to sustain my family. I started volunteering as an event planner and discovered that I was actually great at it. Eventually I got a full-time job working with A-list musicians and planning charity galas here in my local community. I was constantly surprised by my own abilities

And I must say that low confidence is a common remnant of abuse–but I stuck with it, and good jobs led to better ones. I never hid my past, and everywhere I went, women would open up to me about their experiences with violent men. I always listened and did everything I could to lead them toward that final, hardest step: which was leaving. Helping them felt like a calling. Those casual talks led to official ones and, eventually, to a thriving public-speaking career. I now spend my life as a speaker and writer helping women avoid the mistakes that I made.

It has been more than 15 years since I left Scott. I am 42. Christian is now 21, and Amanda is 17. She’s beautiful and smart, a high school honors student. Christian is principled, strong, and handsome; he’s the first person in my family to go to the university. My daughter won’t emulate the relationship I had with her father. Christian won’t drive a desperate young woman to knock on my door, remove her sunglasses, reveal a black eye, and say, “Look what your son did to me.” My life is beyond my dreams. Like most women, I’ve dated the good and the bad, but no one has ever abused me again. If anyone ever tries to hurt me, or my children, an alarm will go off. This time I will listen to it.

So if you are living in an abusive or violent relationship, please it would be a wake up call for you to leave it while you can still breathe because life is too short to live it in pain. (culled from Redbook)