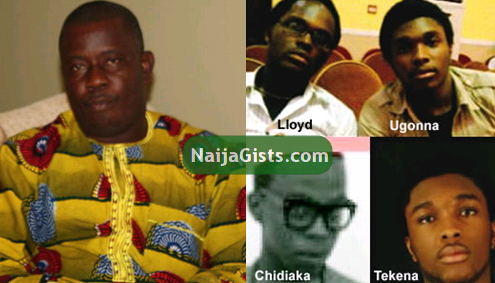 Dr Andrew Efemini, the Dean, Head of Department of Philosophy at the University of Port Harcourt, UNIPORT has been sacked from his position for his participation in the protest against the brutal murder of 4 Uniport students by Aluu villagers in Rivers State on Oct 5, 2012. naijagists.com

Rivers State Chapter of TUC, the Trade Union Congress has condemned his sack by Uniport VC, Prof. Joseph Ajeinka and demanded for his reinstatement.

In a press statement, TUC Chairman in the state, Chika Onuegbu said:

“the VC’s decision to relieve Dr. Efemini as HOD is condemnable, irrational, unlawful, ungodly and provocative.”

“We equally call for the VC’s removal for not showing adequate concern towards this sad and unfortunate death of the four students,” the statement read.

What an insensitive Vice Chancellor.