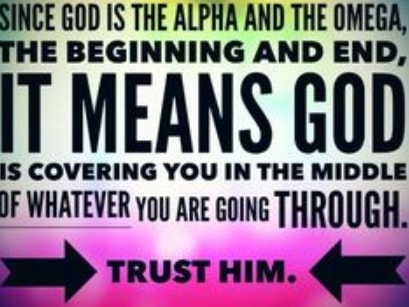 Trust God The Alpha & Omega Who Determines And Controls All Things

As I was driving on a bridge in Lagos, I asked God a question. When I looked up, I saw the answer boldly written on a billboard. I was so flabbergasted; I wondered if what I saw was a vision. Therefore, when I got off the bridge, I decided to go all the way round and back again on the bridge to see if the billboard was real.

When I got to the same spot, I saw the billboard again. It had always been there, with its words as dead letters, waiting for me to pass by. But God gave life to those dead letters and used them to answer my question precisely at the moment when I asked him.

Let me tell you what I have learnt at the feet of the Lord. Everything, without exception, is the work of God. God says: “I am the Alpha and the Omega, the First and the Last, the Beginning and the End. (Revelation 22:13). This means God orchestrates all things. He determines all things. He controls all things; including every human-being.

David acknowledges to God a fundamental truth about God and all mankind known only to few men: “My times are in (God’s) hands. (Psalm 31:15). He notes furthermore that every minute detail of the lives of every man is programmed by God: “You saw me before I was born. Every day of my life was recorded in your book. Every moment was laid out before a single day had passed.” (Psalm 139:16).

On his part, Paul confirms that God controls everybody everywhere: “Christ is all and in all.” (Colossians 3:11). He says: “It is God who works in (us) both to will and to do for his good pleasure.” (Philippians 2:13). David concurs. He says it is God: “who performs all things for (us.)” (Psalm 57:2). Solomon says God even controls what we say: “The preparations of the heart belong to man, but the answer of the tongue is from the LORD.” (Proverbs 16:1).

It is your responsibility to determine precisely what the reason is.” This is an absolutely amazing kingdom dynamic that goes to the heart of God’s providence. It means everything about your life is working to a script: God’s script. If you stand on the street and a car passes by, it did not just happen. The car was “programmed” to pass by. Everything, and I mean everything, is by divine contrivance.

It is so complicated; it is mind-boggling. If you think the World Wide Web is intricate and elaborate; think again. God weaves the lives of everyone together as a weaver does the threads of a cloth. Combined, they are all designed to form a particular pattern.

Just think; there are some 7.6 billion people alive in the world today. In your lifetime, you are unlikely to meet but just a few of them. There must be a reason why you meet the few you meet. God says to Pharaoh: “I raised you up for this very purpose, that I might display my power in you and that my name might be proclaimed in all the earth.” (Romans 9:17). Similarly, there is a purpose that God has purposed in your life. It is a purpose only you can fulfill.

There is a simple kingdom dynamic in all this. Understand it; internalise it. God leaves nothing to chance. Nothing about your life is haphazard. You are too important to God for him to leave you at the mercy of situations and circumstances. Instead, you are at the mercy of God. Therefore, take nothing for granted. Every little detail of your life is important and for a reason. So, gather up the fragments of your life, that nothing be lost. (John 6:12).

Without interfering with your free will, God puts you in a particular space where your dispositions are precisely suited to his will. It is like acting in a play. The Director says you can say whatever you like and do whatever you want in every scene. But he foreknew you. He knew your character; he knew your inclinations. So, he told you: “Just be yourself.” But by being yourself, you are only acting exactly according to his script, because he has contrived everything fearfully and wonderfully. That is the power of God.

Therefore, thank no man for anything; thank only God. Rely on no man for anything; rely only on God. Trust no man, including yourself; trust only God. Make no promises; only express faith in God. Fear neither man nor demons in anything; fear only God. Do all things in God’s name. Pray to God continually about everything. Give thanks to God in all circumstances. Bless God at all times.

“All things work together for good to those who love God, to those who are called according to his purpose. For whom he foreknew, he also predestinated to be conformed to the image of his Son, for him to be the First-born among many brothers. But whom he predestinated, these he also called; and whom he called, those he also justified. And whom he justified, these he also glorified. What then shall we say to these things? If God is for us, who can be against us?” (Romans 8:28-31).