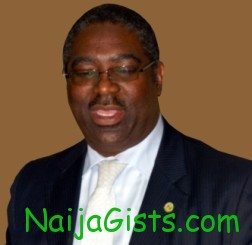 Dec 5, 2011 – Tunde Fowler In Trouble With Fashola Over Extravagant Spending

The fairytale wedding between Funke Fowler and Abiodun Kuku, children of Lagos State Inland Revenue (LIRS) boss, Tunde Fowler and Ogbeni Oja of Ijebuland, Chief Bayo Kuku,; has come and gone, but the ripples caused by the event, described as the most flamboyant wedding in recent times, are taking a toll on the relationship between the bride’s father and Governor Babatunde Fashola of Lagos State.

The wedding ceremony of the young couple was in two parts; and held in two continents. The first part was the traditional wedding held on October 22, 2011. The venue was the Tafawa Balewa Square (TBS), Lagos. The ceremony witnessed a sheer display of affluence as the crème de la crème of the society struggled to get seats at the event.

The Forbes richest man in Africa, Alhaji Aliko Dangote; National leader of Action Congress of Nigeria (ACN), Asiwaju Bola Tinubu; Federal lawmakers, Governors, Captains of Industry and who is who in the country were present at the ceremony which was conservatively reckoned to have gulped over N100 million. naijagists.com

Part two of the ceremony was held in the United Arab Emirates on Saturday, November 19, 2011.

We gathered that Dubai, the capital city of the UAE, was bombarded by the Nigerian nouveaux riche who had gone to witness the wedding. Moneybags in Nigeria took chartered flights to Dubai, while sources claimed Fowler flew all his guests to the Arabian city first class. Indeed, the Fowler and Kuku wedding attracted so much hype, owing to what many described as wasteful spending.

Expectedly, the Lagos Inland Revenue Service boss, Babatunde Fowler has received several knocks from many quarters. Critics have questioned how he got so much money as a civil servant to blow on his daughter’s wedding.

This brazen show of affluence, we learnt, so much infuriated the Lagos State Governor , Raji Fashola, who could not disguise his displeasure with Fowler over the negative reactions the wedding attracted to his government.

According to a source, “Governor Fashola has been receiving many comments which suggest that Fowler used tax payers’ money to stage the wedding for his daughter. Their argument is that people who worked hard for their money would not spend the way Fowler did. Neither Mike Adenuga norDangote would spend like that.”

We further learnt that in a meeting recently, Fashola lambasted Tunde Fowler over the ostentatious wedding.

“Fashola told Fowler in the presence of the people at the meeting that he (Fowler) is too flamboyant and extravagant. And if he could have his way, the LIRS boss would be removed from office immediately,” our source added.

We learnt that since the one-in-town wedding, relations between the Governor and Fowler have been frosty.(global news)