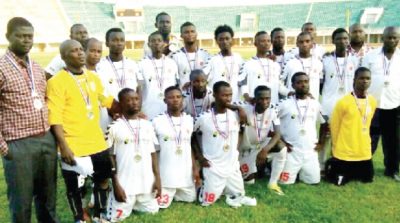 The team’s Coach, Banjo Kamiludeen, said on Saturday in Lagos that efforts to get visas for the team proved abortive.

“Honestly, the whole thing is very disheartening; we did everything possible but the embassy denied the team visas to participate in the Deaflympics.

“The Federal Ministries of Sports, Internal and External Affairs were involved in the whole process but to no avail; the World Deaf Football body wrote to the embassy but nothing happened.

“As I speak, the embassy didn’t give us any cogent reason why we were denied visas to the competition,’’ he said.

Kamiludeen added that participating in the Games would have been life changing for the deaf players and urged the government to take measures to address such issues.

“Many of the players are in a very bad state of mind now, they have prepared their body and mind for the Games only to get a negative news.

“We got sponsorship from “Bet9ja’’, a gaming outfit, to attend the event but it is sad everything ended this wa

“I appeal to Federal Government to summon the Turkish Ambassador to give reasons why the team was denied visas,’’ he said.

The national deaf team had its first outing at the 2013 Deaflympics in Sofia, Bulgaria, and crashed out in the group stage.