Officials of the Humanist Association for Peace and Social Tolerance Advancement (HAPSTA) and Child’s Right and Rehabilitation Network (CRARN), said at the scene that the rescue was a result of their collaborative campaign to curb child stigmatisation. 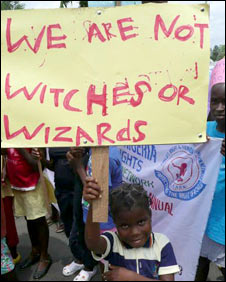 Mr Ayobami Ojedokun,  Project Centre Manager of HPSTA told reporters that the organisations were also collaborating with the Police and traditional rulers to reconcile the stigmatised children with their families.

“The children we rescued today (Jan. 30) from the market, aged nine and 13, were abandoned and they were sleeping at the market in Okopedi area of Okobo Local Government of Akwa Ibom.

“We have commenced the process of reconciling them with their families, the Police Division in Okobo and the traditional rulers have been very supportive.

“Our aim is to use advocacy to sensitise the communities on the ills of stigmatising children and educate them that it is also illegal to brand children as witches in Akwa Ibom since 2008.

“When advocacy fails we shall then resort to prosecuting the parents and those responsible for the stigmatisation,” Ojedokun said.

He also said that the activities of the NGOs were driven by a network of community volunteers who report incidences of child-witch stigmatisation and abandonment.

“We have a network of volunteers who often feed our field officers in areas with high prevalence of child witch cases, we got such a distress call and we visited the market and the children have received temporary relief,” he said.

He noted that one of the victims accused of witchcraft was said to have injured a fellow child while playing, saying that belief in witchcraft practices by children was merely superstitious belief.