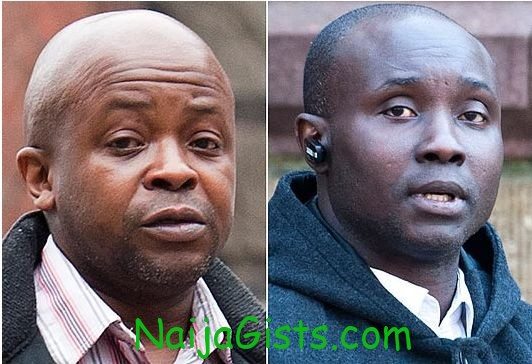 There guys were arrested for fraud. They apparently hijacked people identities and using them to make false benefit claims.

Their fraudulent activities fetched them £1.7million. What a disgrace! naijagists.com

Read the detail news headlines from The Sun Newspaper below

The Nigerian-born gang are accused of ripping off nearly £900,000 in tax credits over five years by submitting claims using names, dates of births and addresses raided from the Department of Work and Pensions’ confidential database.

They are also said to have netted another £820,000 in bogus claims for Sure Start Maternity Grants — a one-off £500 payment to support pregnant women.

They backed these claims by forging the signatures of midwives, nurses and doctors, Croydon Crown Court in South London was told. The cash was said to have been paid into accounts they had set up.

Prosecutor Andrew Evans said Anthony Ekajeh, 48, of Rainham, Essex, played a “principal” role in the fraud while an executive officer at the Dagenham JobCentre in East London.

He denies conspiracy to defraud along with Fiayo Akinwumiju, 35, of Coulsdon, Surrey, and Olufemi Kehinde, 47, of Acton, West London, who worked in other branches.

Three others are being tried in their absence and a seventh man admitted three charges at an earlier hearing. The trial continues.”

Every Nigerian is now a potential fraudster in UK, and getting decent jobs will always be difficult if these type of people keep messing things up.

These are faces making Nigerians look bad all over the world. God have mercy!

Photo News: Seun Kuti Performs At SXSW 2012 in Texas
Don Jazzy and D’banj Split: The End Of A Business Era