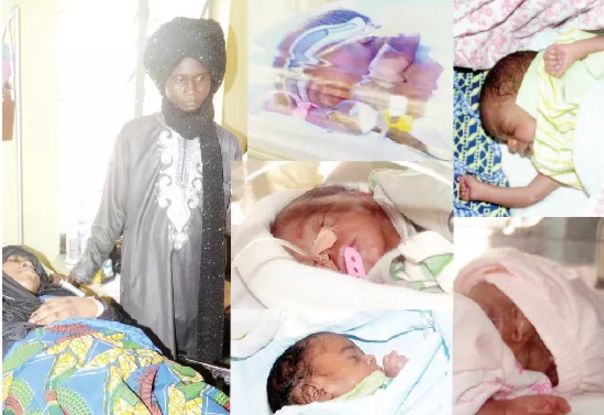 University College Hospital (UCH) in Ibadan said it had refunded money paid by the parents of quintuplets delivered in the hospital recently.The hospital added that it had also waived all the expenses the couple had incurred since the day of the woman’s admission.

The Public Relations Officer (PRO) of the hospital, Mr. Deji Bobade, disclosed this in a text message he sent to our correspondent in Ibadan.

The couple, Yusuf Rasaq Ewenla (cleric) and Sakirat (in purdah) had been blessed with three boys and two girls, all of who are still in the hospital’s care. The couple had two children before the miraculous gifts. Bobade said that all funds paid so far since February 15 when the woman was delivered of the babies at the hospital had been refunded as at February 22.

He said: “UCH waived off the hospital bill of Baba five.” The PRO, however, said that the “the amount cannot be ascertained now since they are still on admission.

The ones they have paid before today (Monday) are to be refunded to them.”

The couple, it was learnt, had the eight day prayers for the babies on Monday at their 2, Akeem Street, Ijokodo area of Ibadan.

The father of the quintuplets, Alfa Rasaq, confirmed UHC’s gesture. He said: “My wife actually told me that she was told by the hospital management that they are going to pay us back what we have spent.

However, they have not done so as at this time you are talking to me. But we appreciate the management for this gesture. Allah will be with all of them.”