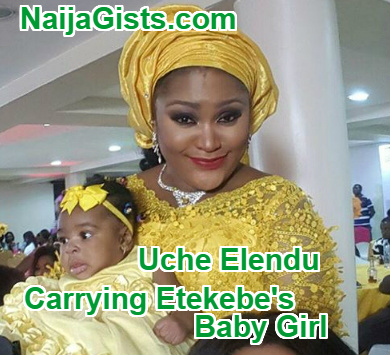 Oct 6, 2016 – Uche Elendu Allegedly Cheated On Husband, Got Pregnant For Another Man Before Relocating To America

If the story making rounds is anything to go by, then Nollywood actress Uche Elendu’s adulterous lifestyle was the cause of her marriage crash.

Recall that the actress was dumped by her Owerri Millionaire hubby last year.

An insider has exposed the dirty secrets that crashed Uche Elendu’s 3-year-old marriage.

According to the source, Uche Elendu recently painted her hubby, Prince Ogochukwu Igweanyiba in a bad light when he revealed to friends that he will soon make Beauty Queen Sandra Chichi his wife.

The whispering bird said the actress was asked to pack out of her matrimonial home last year after her husband caught her red handed committing adultery with a friend, Iyke Kalu aka Etekebe.

The act which is considered abominable and unpardonable in Igbo Culture reportedly forced the actress to relocate to Lagos from Owerri last year and stopped wearing her wedding rings.

Uche Elendu relocated to the United States shortly before she gave birth to her daughter.

The source added that Uche Elendu’s second child belongs to Iyke Kalu and not her husband as widely circulated in the media.

Her baby daddy, the serial womaniser mentioned above is from Abia state. He is popularly known for sleeping around with single Igbo celebrities in Lagos.

He reportedly rented an apartment for her in Ajah area of Lagos months before paying for her relocation expenses to the United States.

Here is what another source told ShellBy Media about Uche Elendu’s dirty lifestyle.