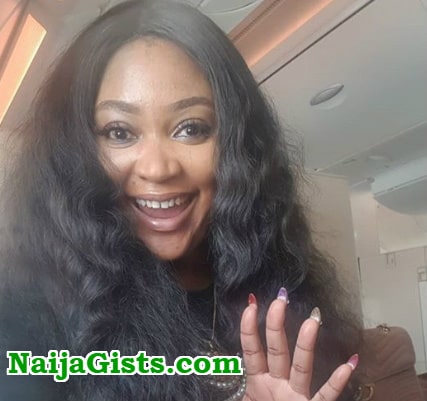 Marriage Is Not Friendship Or Courtship; It Is A Serious Business – Uche Elendu

Nollywood actress Uche Elendu whose first marriage crashed under a mysterious circumstance years ago has revealed her plan to give marriage another try.

In a chat with Sunday Scoop’s reporter Tofarati Ige, the single mother said she was not in want of male attention as men are drooling over her beauty.

“Of course, I am a very beautiful woman and I should get passes. If nobody makes a pass at me, then I’d be worried. But as a Christian, I do things right. I am mature enough to control things and make the right decisions.

“I am definitely willing to give marriage another shot. From my first marriage, I learnt not to be in a hurry to do anything. Don’t be in a haste to jump into marriage; you should really take your time to make sure that you’re with the right person and you’re both compatible. I got married to a very wonderful man but I guess we were not compatible.

Don’t just get married because everybody else is doing that, or based on a person’s good looks and money.

“Marriage is not friendship or courtship; it is a serious business. You also have to pray about it and that’s one of the mistakes I made because I didn’t pray about my marriage. When problems arise in your marriage, you should be able to endure. I guess I was always too quick to act. Give God a chance in your marriage.”

You attract what you speak!!! There is power in the tongue… I praised God like never before today for all he has done and is doing in my life and family. Yall should do same. Clad in this statement outfit from @valenciapoisehouse i looveet. Your quality is top notch Shoes @houseofempress.hoe Bag @worldofclassb Body goals by the one and only!! Simply the Best body sculptor in Nigeria @Killercurvesbeautystore My darling Cindy! I feel your pain, but im not shaken! loosing a business account on ig is frustrating BUT I PLEAD WITH ANY AND EVERYONE WHO HAS PLACED ORDERS WITH @Killercurvesbeautystore TO BE PATIENT AS THE ACCOUNT WILL SOON BE RESTORED, HOWEVER YOU CAN REACH THEM ON WATSAPP 07032177903, 08105692530 OR DM THE BACK UP PAGE @killercurvesnigeria AND YOU WILL BE ATTENDED TO. Thanks my sweet sis @mercyjohnsonokojie for the love and support even at this time. You are a sister indeed. NO SCAM ZONE!!! WE OVERCOME AND STAND STRONG!!!! I LOVE YOU FOR GIVING ME MY DREAM BODY @Killercurvesbeautystore be back and better😍

On Her Plans To Venture Into Politics, the actress said;

“Definitely, participating in politics is on my agenda and I am working towards it. I want to serve my people. I am young and vibrant, and I have a lot to offer.

“When the time comes, I will let you know in what capacity I will like to serve, but for now, I’m still working on myself and praying. My faith should not affect the call to serve because in the real sense, politics shouldn’t be a dirty game, though it has turned out to be that way in Nigeria. However, some people stand out and make a difference, and I want to be one of such people. As a child of God, I should serve my people and lead them aright”.

Baring her mind on entertainers who campaign for politicians, Uche said, “I can only speak for myself. Most of the entertainers are just protecting their personal interests. Everybody has a right to support whichever candidate he or she would benefit from, and I think that’s what they’re doing. You know politicians like promising a lot; we just hope that they would also support us when the time comes. But most times, they get into office and ‘dump’ us. I don’t see anything wrong in supporting a particular candidate though I’m not part of it.”