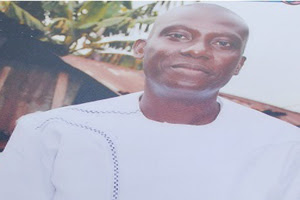 APC Chairman in Rivers State, Franklyn Obi, his pregnant wife, Uloma and son, Bestman who were murdered on 5th of March in their home at Omoku, Rivers State, are to be given a mass burial same day.

A statement jointly signed by Felix Ejechi and Emenike Onyige, on behalf of APC Ward 4, in Ogba/Ndoni/Egbema Local Government Area (ONELGA) of Rivers State, stated that until his death, Franklyn Obi was the ONELGA APC Ward 4 Chairman.

He was murdered alongside his wife and son, “two days after functioning as the Master of Ceremony at a meeting of the APC in Omoku.”

The statement added that a mass burial for them would hold on 14 October, 2016, after an open air church service at St. Stephens School field, Omoku.

Late Franklyn Obi was 46 years old at the time of his death while his pregnant wife, Uloma was 42. Their son was 18.

Uche Elendu In Adultery Mess: Actress Caught Cheating With Husband’ Friend Kicked Out Of …
Houseboy Robs Londoner Boss In Magodo Lagos To Raise Money To Build A House In His Village