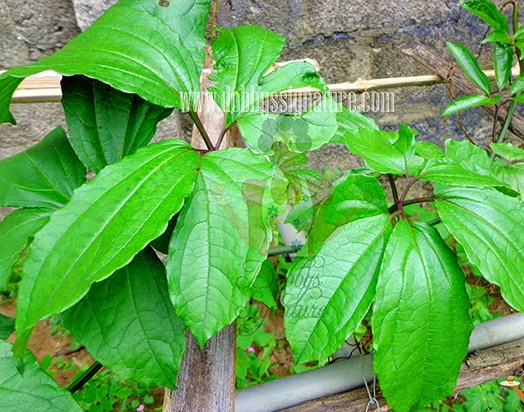 Many Nigerians consuming fluted pumpkin vegetable, popularly known as ugu, are actually eating their way to good health, according to experts.

The vegetable, which is popular among many in the South-East and South-South zones of the country, is increasingly becoming more popular among other Nigerians that now know that ugu is packed full with essential nutrients. And now, wherever anyone turns, the vegetable is grown, sold and consumed.

A biochemist, Mr. Abolanle Kayode, and nutritionist, Patience Chima, have affirmed the inherent benefits of fluted pumpkin leaf. And to Abraham Johnson, a professional cook, ugu is being consumed now by most people living in the North-East zone.

Kayode, a researcher and lecturer in Biochemistry at the Department of Clinical Sciences, Bells University of Technology, Ota, Ogun State, said research had consistently shown that fluted pumpkin contributes to blood building and good health.

Kayode’s comment came on the heels of reported widespread consumption of the fluted pumpkin by people living in Jalingo, Taraba State, and the rest of the North-East. In the western part of the country, many people are said to be eating the vegetable and even growing it for profit.

The demand for it in Lagos alone is now so high that its suppliers can hardly cope, with traders in the commodity shipping in large quantities mostly from Akwa-Ibom. Yet demand still outweighs supply. Growers of the vegetable in the South-West area are said to be making good money.

Speaking to Daily Sun recently, Kayode who said he had conducted studies on ugu with a team of researchers, urged Nigerians to abandon their ethnic biases for the vegetable and embrace it, stating emphatically that it is exceedingly rich in iron and vitamins.

“To be honest with you, recent studies have shown that telfairia occidentalis or fluted pumpkin, which many know in local palace as ugu, is rich in minerals, such as iron, potassium, sodium, phosphorus, calcium and magnesium. It also has anti-oxidants and vitamins, such as thiamine, riboflavin, nicotinamide and ascorbic acid.

“At the moment, ugu has become very popular and assumed a very important staple food of most people across the country. However, it is strongly believed that it originated from the southeastern part of the country, which is why it is often being cultivated and distributed by the Igbo, who call it ugu and many of us have come to embrace it.

“All the same, the high protein content of the vegetable can have supplementary effect for the daily protein requirement of the body. It can effectively be used to fight and prevent diseases, such as kwashiorkor and marasmus, which cause severe loss of body weight in children as a result of malnutrition.

“Fluted pumpkin leaves have this hypolipdemic effect and may be a useful therapy in hyper cholestolemia, that is in the control of high level of cholesterol in the body. For pregnant women, it is very good because it has the highest vitamin A content, when compared to other vegetables and this is adequate enough to sustain the Vitamin A requirement in pregnant women.

“And what is more? Fluted pumpkin boosts blood level. Because the leaves are rich in iron, the vegetable plays a key role in the cure of anaemia; it is indeed noted for its lactating properties and for that reason, it is very good and highly recommended for nursing mothers.”

Kayode suggested that ugu might have anti-diabetic effect and for this reason, had every potential to reduce blood glucose level, just as its consumption can help to fight malaria fever. He added that the vegetable equally had properties that could prevent liver damage and it also had antioxidants that could assist in preventing a lot more diseases.

Affirming its health importance, Chima said: “Ugu is a vegetable low in calories and contains no saturated fat or cholesterol. It is one of the vegetables that contain very high dietary fibre, anti-oxidants, minerals and vitamins, such as vitamin A, vitamin C and vitamin E. Vitamin A is a very essential natural anti-oxidant, which is necessary in maintaining a healthy skin. It is also good for the maintenance of good sight.

It has also been suggested that it could be useful in fighting cancers. Anyone interested in controlling their cholesterol level and cutting down on their weight, might find ugu very useful.”
Johnson, a cook working in a hospital in Jalingo, told Daily Sun that most people in the state were eating more of ugu unlike before, saying that some hospitals in the state recommend it to women and children, who are suffering from malnutrition.

His words:“Until recently, many residents of Taraba State only saw ugu as a vegetable for people from the south, particularly the Igbo. They had nothing to do with it. Then, our people only consumed cabbage, lettuce, onions, aleho and yakwa leaves and detested ugu.

“But now, all that has changed. As I speak to you, the vegetable is being heavily consumed by our people. In fact, the rate is so high now. More and more people are getting to discover its richness; everyone is enjoying it.

“I can say that it is not only the people of Taraba State, but a large number of people in the whole North East have long known about it. We now use it to cook our soup and even make vegetable sauce.
“The popularity of the vegetable in the recent past soared because some people, who visited the hospitals in the recent past were told by doctors and nurses to consume more of it.
“Pregnant mothers in particular were told to eat plenty of ugu leaves because it is believed to enrich the blood cells much more than any other vegetable we have around.

“For this reason, our people have now gone the extra mile by learning to farm the vegetable. Some Igbo people living in Taraba State have taught our people to farm it and now, they are doing well at it. They are also selling it and making money,” he said.
One of the persons, who has made real money farming ugu, Daily Sun learnt, was a woman simply identified as Mrs. Okobo. According to the source, the woman who lived in Ado Odo Local Government Area of Ogun State, had a fairly large farm and from the proceeds she made from her farm, she had been able to see two of her children through university.

“Her farm is in a village in Ado Odo. She simply rented a virgin land from the natives and cultivated the vegetable. She cares for it until it is harvest time. In a month or two, the vegetable is ready for harvesting. She does round-the-year farming.

“For the number of years I have known her, this is what she has been doing. And today, she has trained two of her children that I know in the university.”

Daily Sun was told that the woman’s customers stream in from Lagos to harvest the vegetable. The traders later resell the vegetables in the urban markets.
A lady, Ogechi, who sold ugu on a street close to Ijeha Market in Surulere, Lagos, told Daily Sun that consumption of the vegetable was high.

“We have many customers who supply us from Akwa-Ibom and other states. We also receive supplies from those who bring it from some parts of Ogun State and elsewhere.”
She said part of the challenge the vegetable has is that it is easily perishable although patronage for it is high.

“You can’t keep the vegetable for a long time after harvest. It is best sold fresh. That is when most customers like it. Once it is fresh and leaf green, you can sell any quantity,” she said.

She refused to disclose how much she made daily from her sales, but hinted that profit from it was fairly good to keep her family going.