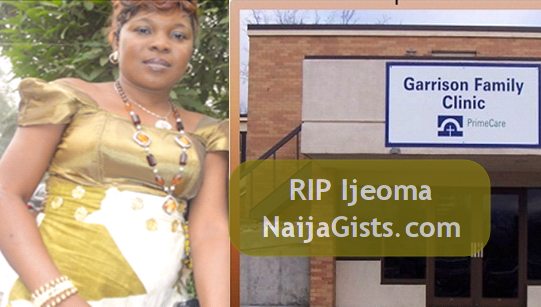 A pregnant Nigerian lady has died because doctors in Port Harcourt insisted the husband must pay N20,000, less than $150, before she was treated. And her family members are still in shock about her death, such that they are not even thinking of burying her for now.

The 34 year old woman, Ijeoma Umumadumere, nee Ahamefule, was rushed in the morning of 25 November to Garrison Clinic in Port Harcourt, when she complained of a sudden stomach pain and headache, while cooking. Her husband rushed her to the clinic on Udom street in the oil rich city. It was between 9-10 a.m. And she was five-months pregnant.

But doctors and nurses would not attend to the pregnant woman because the husband only had N5,000 on him, instead of the N20,000 being demanded, as a precondition for treatment. Even the N5,000 the man had on him had been used to offset registration and other costs.

Her brother, based in Austria could not understand why doctors in a Nigerian hospital could have so callously and uncaringly treated the woman, pregnant with her first child. As he put it:

“Her husband begged the doctor and the nurses to attend to her since they had collected about N5, 000 he had in his pocket in the name of registration and other little things while he would go home and bring money. He had also told them that because of the nature of the emergency and the way his wife had been shouting while on the ground that his mind had only been pre-occupied with the thoughts of rushing her to any nearby hospital and had not thought of money or any other thing as he had even forgotten to put on shoes, but all his pleading and explanations to the doctor and the nurses had fallen onto deaf ears. With her pains increasing and death knocking and the doctor and the nurses refusing to understand, there was no way he could have left her there unattended, to go home and bring money. He took her and headed to another hospital, but unfortunately my sister did not make it as the damage had already been done before the doctors in that second hospital could do something reasonable to save her life.”

“What a country, what a failure and what a loss! This is a sad story of the sorry state of the Nigerian health policy, how Nigerians are heartlessly and carelessly neglected because of money by doctors and nurses to die in hospitals, and how I lost my sister to a failed system,” wrote Uzoma Ahamefule, based in Austria.

Many hospitals in Nigeria, both private and public, are in the habit of asking for pre-payment from patients, even when the case is an emergency (PM News)

Haba some of these doctors are heartless. Some of them value money more than human life.