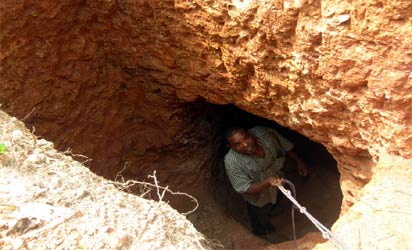 An underground house (den-style) has been discovered in a forest in Ijebu, Ogun State Nigeria where ritualists carry out ritual killings. naijagists.com

The state Police Public Relations Officer, Muyiwa Adejobi, who stated this said the command had begun an  investigation into the matter.

According to him, the suspects, Kehinde Rufai,Debo Awonaya and one David, are cooling their feet in  police custody.

Vanguard gathered that the place  was located between Ijebu-Ode and Atan, closed to the border area of Oyo, Ogun and Ondo states.

An eye witness told Vanguard, however, that some youths discovered the ritualists underground den located in a forest after a 70-year-old man identified as  Kehinde Rabiu was declared missing.

According to the source, residents of the area were shocked when they saw the underground den which has stairs underneath.

The suspected ritualists were reported to have built a house beside the underground in the forest and planted indian hemp around the place.

Speaking on the incident, Chairman of Community Development Association in the area, Kola Ologbode, described the three suspects as criminals.

He said the trio had been known for criminal activities, adding that, he had overheard them saying they were looking for aged man for a business.

Also speaking, the village head, Durojaye Olugbode, begged the government for assistance to get rid of kidnappers in the area.

May God protect us from these evil ritual killers.