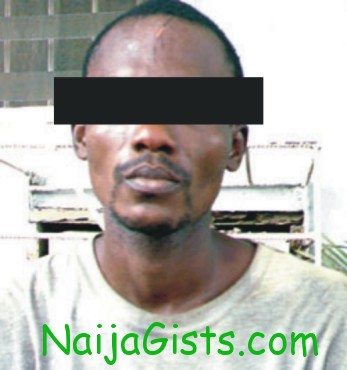 A man identified as Ilias Mudashiru, on Wednesday at an Igbosere Magistrates’ Court bagged six months imprisonment for touching a girl’s breasts indecently and stabbing her relatives.

Magistrate F. O. Sasanya convicted Mudashiru, 29, after he pleaded guilty to the three-count charge of conspiracy, indecent assault and assault occasioning harm against him.

The verdict followed a review of the case by prosecuting Sergeant Godspower Ehizoba.

“The sentence will run concurrently.”

Mudashiru was arraigned on April 26.

Reviewing the case, Ehizoba said the convict committed the offence on April 21, at about 8:20am, at Bombata Market, Oroyinyin Street, Adeniji Adele, Lagos Island.

He said Mudashiru conspired with others at large and indecently assaulted the girl by touching her breasts while she was on her way to a clinic.

Ehizoba said Mudashiru stabbed two of the girls who came to her rescue in the head, neck and arm with a broken bottle.

Nigerian Woman Sentenced To Death By Hanging For Killing Neighbour During Fight Over Bench In Ajegunle Lagos
Tailor Robs Mechanic, Pushes Him Into Oncoming Vehicle After Repairing His Truck