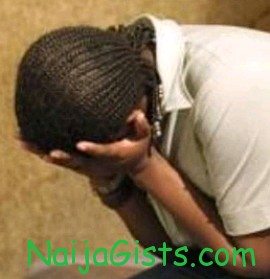 Abakugu Nkiruka, a female Undergraduate student of the University of Lagos (UNILAG) is currently in critical condition in hospital after she jumped from a 3-storey building while attempting to escape rape by a stranger she met on Facebook on Thursday Nov 1st, 2012. naijagists.com

The 21-year-old UNILAG undergraduate student, Nkiruka met the man on Facebook and she was invited to a night club in Apapa and the pairs ended up in his bedroom at an 1004 Estate in Victoria Island, Lagos.

One thing led the other, she was asked for intimacy which she rejected owning to the fact that she’s on her period.

Her rejection for intimacy caused a serious argument that led to her injury.

Nkiruka said she jumped from the 3rd floor of the apartment in a bid to escape being raped.

The Unilag student who suffered broken Pelvis is currently undergoing emergency surgery at the General Hospital in Marina, Lagos.

According to a friend of the victim, the injured lady met the young man from Facebook over 3 weeks ago.

She told NAN that the 26-year-old man (names withheld) last Wednesday invited her to a night club in Apapa from where they ended up in his family home at 1004 Estate, Victoria Island, Lagos.

She noted that the young man had earlier talked about sex on phone prior to the outing but she told him she was menstruating.

Nkiruka said that on getting to the house, the man tore her dress and tried to rape her.

According to Nkiruka, the man thereafter pushed her down from the third floor of the building because she refused to have sex with him.

When contacted, the mother of the young man, who was at home on the night of the incident, however, told NAN that she was not aware of what happened, saying that she slept around 10 p.m., while the disagreement between the couple started much later.

The mother, who pleaded anonymity, disclosed that she paid part of the hospital bill immediately after Nkiruka was admitted, and even tried to transfer her to a private hospital.

“I took her as our own daughter and so, I can do anything that will make her recover quickly,” she added.

She insisted that her preliminary inquiry indicated that Nkiruka was not pushed by her son as alleged, but that she jumped on her own in the ensuing scuffle.

When contacted, CSP Fayoade Adegoke, the Divisional Police Officer (DPO) of Bar Beach, Victoria Island, Lagos, told NAN that Nkiruka wrote in her statement to the police that she jumped on her own, in order to escape being raped.

Adegoke said that he ordered his men to convey the victim to the hospital immediately after he was informed of the incident by night security guards in the area.

The DPO said that the suspect was released on bail, pending further investigation into the matter.

NAN recalls that seven young men, including two who met her on facebook, are currently facing trial for the alleged rape and killing of 24-year-old Miss Cynthia Osokogu, in Lagos earlier this year.(NAN)