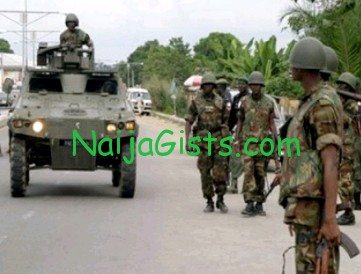 Mubi, the Nigerian town in Adamawa state, where scores of students were slaughtered on independence day, is back in the news, still for the worse.

Boko Haram Islamists have carried out scores of similar attacks in the area, repeatedly targeting the military as part of an insurgency that has killed hundreds since 2009.

Residents said children were hurt in the blast at Kashuwar Sanu (cattle market) in the town of Mubi, which went off as a convoy of military vans drove through.

“There was an explosion that targeted a military patrol team, but the explosion missed the target as none of the patrol vans were affected but two civilians were killed,” said Brigadier General John Nwaogu, the top military commander in the area.

A resident said a young girl was among those hurt and reported seeing “a young boy with both legs blown off.”

After the blast, soldiers left their vehicles, fired their weapons and made several arrests, according to two witnesses who requested anonymity.

“I was in my shop when I heard an explosion which was followed by shootings and I saw people running,” said one shop owner near the market.

“I was told there were arrests after the blast,” he added.

The military blamed Boko Haram for a separate blast in the nearby city of Maiduguri, which is considered Islamist group’s base.

“A remote-controlled improvised explosive device went off as a military patrol vehicle was passing along Bama road around 8:35 am (0735 gmt) today without causing any casualty,” Lieutenant Colonel Sagir Musa told AFP.

Mubi was the site of gruesome massacre at a university student housing building last month where at least 40 people were killed, including many who had their throats slit. It is not clear who carried out that attack.

Violence linked to the Boko Haram insurgency is believed to have left more than 2,800 people dead in the north and centre of the country since 2009, including killings by the security forces.

Boko Haram has said it wants to create an Islamic state in the mainly Muslim north of Africa’s most populous country, where the south in predominately Christian. (Report by PMnews)