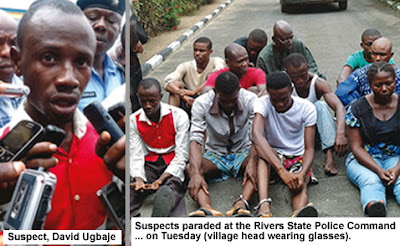 The 13 arrested killers of the 4 Uniport Students were today arraigned in Port Harcourt Magistrate Court on 5-count charge including murder. naijagists.com

The presiding magistrate, Emmanuel Woke has ordered them placed in detention.

He further turned down their non-guilty plea stating that the Court lacked Jurisdiction to entertain the case.

He therefore ordered that they be remanded in Port Harcourt prison pending when they are brought before an a High Court of competent jurisdiction.

David Ugbaje and Ikechukwu Louis Amadi aka Capoon told journalists on Tuesday that they only beat the late students and didn’t participate in their murder.